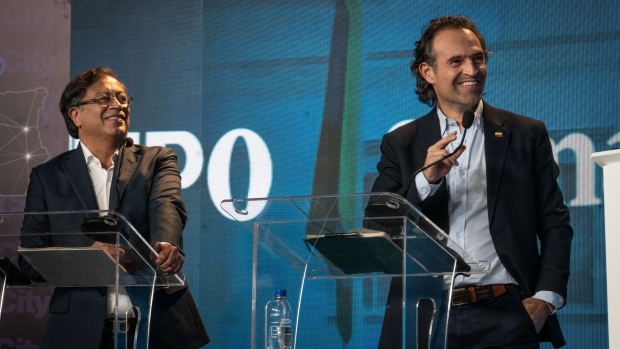 Rodolfo Hernandez, independent presidential candidate, speaks during a presidential debate at the Corferias convention center in Bogota, Colombia, on Wednesday, April 20, 2022. Candidate Gustavo Petro maintains a lead ahead of the May 29 vote but would face a technical tie in a likely runoff with the top three contenders. , Bloomberg

(Bloomberg) -- Colombians head to the polls on Sunday amid strong indications that the anti-establishment mood sweeping Latin America could lead them to abandon the pro-business Washington-centered model they’ve embraced for decades.

He’s widely expected to take first place but to fall short of a majority, especially if his young base fails to vote in large numbers. If that happens, the focus will be on who’ll come second and face Petro in a June 19 runoff.

The main contender is Federico Gutierrez, 47, a conservative popular with older Colombians who defends the nation’s free-market model. But a late surge for Rodolfo Hernandez, a short-tempered 77-year-old who has sometimes been compared to former US president Donald Trump, could set up a second round contest between two populists who want to steer the country in a new direction.

Hernandez, a businessman and former mayor of the provincial city of Bucaramanga, has risen with a simple message that the country’s political class are a bunch of out-and-out crooks who must be removed and, in many cases, jailed. He was relatively unknown outside his home province until 2018, when a video circulated of him slapping an opponent in the face.

Colombia has long been one of the most stable economies in Latin America, avoiding the debt defaults, hyperinflation and slumps that have plagued its neighbors. But the rise in poverty and hunger during the pandemic, and the unpopularity of the government of President Ivan Duque, have increased voter dissatisfaction.

About a quarter of Colombians don’t eat three meals per day, up from about 10% before the pandemic, according to the national statistics agency.

“Voters want a dramatic change,” said Muni Jensen, a Colombian political analyst at Albright Stonebridge Group in Washington. “You see it all over the region where both left and right governments have been elected, so it’s not necessarily an ideological push, it’s discontent with the political system.”

Last year, the nation was roiled by weeks of unrest which left dozens dead. It was initially sparked by an attempt to raise taxes, but morphed into a mass protest movement against police brutality, corruption and inequality, among other grievances.

The election is being closely watched by investors after Colombia’s Andean neighbors Peru and Chile voted in anti-establishment leftist presidents last year. Colombia’s electoral authority forbids the publication of polling data within a week of the election.

Jensen added that since Hernandez taps into the thirst for change while appealing to those frightened by Petro’s past and ideology, he would probably have a better chance than Gutierrez in a second round.

Petro says he wants to end an economic model based on crude oil and coal, which currently account for about half of the nation’s exports. He’s pledged to halt the awarding of oil exploration licenses and fire most of the board of Ecopetrol SA, Colombia’s state-controlled oil company, and start turning it into a clean-energy producer.

He also wants to raise tariffs to protect local farmers and industry, and has promised to guarantee a public sector job for anyone out of work.

His comments and growing popularity have alarmed many investors, and the cost of insuring the nation’s dollar bonds against default surpassed Brazil’s this year, even though Colombia has a better credit rating.

Gutierrez, on the other hand, says he would run an investor-friendly government, crack down on crime, and boost spending on the rural road network and pre-school education. But he’s seen as someone who wants to preserve the current system at a time when many Colombians want to overthrow it.

The desire for change is rooted in the establishment’s inability to stem the rise in poverty, said Gabriel Silva, a former defense minister and ambassador to Washington.

Colombia has long been the strongest US ally in the region, but if Petro wins, Washington will no longer be able to take the relationship for granted, Silva said.

Asked for his impression, former Colombian Finance Minister Mauricio Cardenas said in Davos, Switzerland on the sidelines of the World Economic Forum, “It is a very polarized election and this is not about moderation, this is not about making sensible promises and proposals about reform. This is about who is the boldest, talking about the largest increases in the budget, the largest social programs, which are unaffordable for Colombia today.”