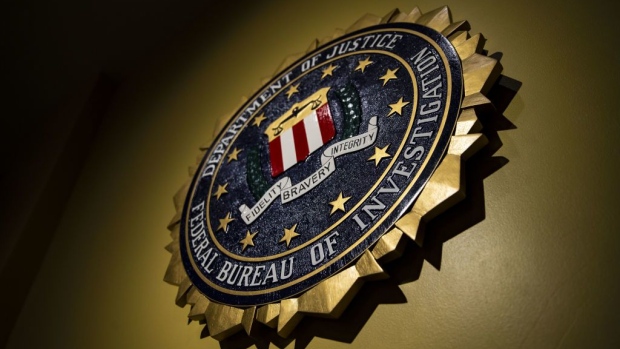 The seal of the Federal Bureau of Investigation (FBI) hangs on a wall before a news conference at the FBI headquarters in Washington, D.C., U.S., on Thursday, June 14, 2018. Former FBI Director James Comey was "insubordinate" in handling the probe into Hillary Clinton, damaging the bureau and the Justice Department's image of impartiality even though he wasn't motivated by politics, the department's watchdog said today. Photographer: Bloomberg/Bloomberg , Photographer: Bloomberg/Bloomberg

(Bloomberg) -- In one of the biggest New York Mafia prosecutions in recent years, the alleged boss of the Colombo crime family and 13 others were indicted Tuesday and face a host of charges including racketeering and extortion.

Reputed Colombo boss Andrew “Mush” Russo, underboss Benjamin “Benji” Castellazzo, consigliere Ralph DiMatteo and Colombo family captain Vincent Ricciardo were among those accused by Brooklyn federal prosecutors of trying to take over a Queens-based labor union and attempting to extort at least $10,000 a month from both the union and its health fund.

One of the people indicted remains at large. The others are set to be arraigned Tuesday afternoon. Lawyers for Russo and DiMatteo didn’t immediately respond to requests for comment, and a lawyer for Ricciardo couldn’t immediately be identified.

“Mr. Castellazo is innocent of the charges against him will be pleading not guilty at his court appearance later today,” Jennifer Louis-Jeune, a lawyer for the alleged underboss, said in an email Tuesday.

According to prosecutors, Ricciardo repeatedly threatened to kill a senior official at the union if he didn’t acquiesce to the mob’s demands.

The official “knows I’ll put him in the ground right in front of his wife and kids,” Ricciardo allegedly said in a recorded June 2021 conversation. In May, the mob captain allegedly described the official as being “deadly afraid” to meet him at a restaurant.

“He is afraid but I told him, ‘The restaurant ain’t going to help. If I am going to kill you, you would have been dead already,’” Ricciardo allegedly said.

“The underbelly of the crime families in New York City is alive and well,” Michael Driscoll, assistant director-in-charge at the Federal Bureau of Investigation, said in a statement. “These soldiers, consiglieres, under bosses, and bosses are obviously not students of history, and don’t seem to comprehend that we’re going to catch them.”

New York’s Mafia families have been decimated by a major federal prosecution drive that began in the 1980s and has seen scores of mobsters become cooperating witnesses in the past decades.