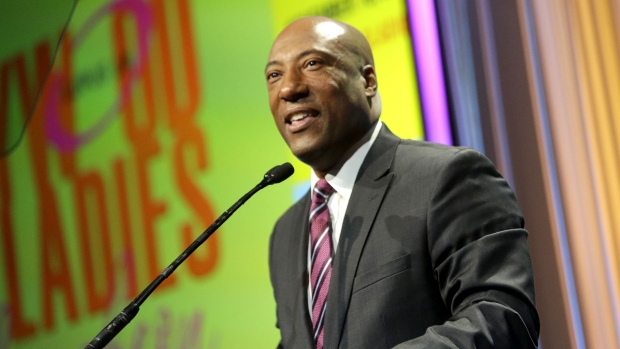 With Comcast Corp.’s fight against media mogul Byron Allen’s racial-discrimination lawsuit about to reach the Supreme Court this week, a congressman has weighed in with a call to dismantle the cable and entertainment giant.

Allen, the former comedian who controls Entertainment Studios Inc., alleges that Comcast’s unwillingness to carry most of his cable channels is discriminatory. The U.S. Court of Appeals for the Ninth Circuit ruled in June that the suit could go forward, and the Supreme Court agreed to hear Comcast’s appeal of that ruling.

At issue is Comcast’s agreement to carry independent TV networks as a condition of its 2011 acquisition of NBCUniversal. Allen maintains that Comcast’s refusal to carry Entertainment Studios networks such as ES Lifestyle Network, Comedy.TV and Cars.TV violates the memoranda of understanding reached under the deal.

Representative Bobby Rush agrees. “Simply put, it is my belief that the Comcast Corporation needs to be broken up,” the Illinois Democrat said in a letter to Chief Executive Officer Brian Roberts. “Comcast’s decision to ignore the memoranda illustrates a careless disregard of minority communities and their interests.”

It’s unclear under what mechanism Rush would push for a breakup of Comcast.

Allen said he pitched his channels to Comcast at the time of the merger approval, to no avail. “This is what everyone feared about their merger,” he said in a phone interview.

Comcast has “gone above and beyond the MOUs from the NBCUniversal transaction in every case,” said a company spokesman, adding that Allen chose not to participate in its memoranda-of-understanding process. “There is no major media company in America that has done more to promote diverse programming than Comcast.”

The spokesman said Comcast carries black-owned channels such as Sean Combs’s Revolt and Magic Johnson’s Aspire. It also carries the Weather Channel, which Entertainment Studios bought last year for US$300 million, under an agreement that predates the acquisition.

Allen said Comcast had told him he didn’t need to participate in the memoranda-of-understanding process because it had his information from previous submissions. He said he didn’t press the issue because he believed the process to be fraudulent.

Allen has based his lawsuit on Section 1981 of the Civil Rights Act of 1866, a provision barring racial discrimination in contracting. The Ninth Circuit didn’t rule on the merits of his claim but said Allen only needed to show that racial discrimination was a “motivating factor” in Comcast’s decisions not to carry his channels.

Comcast said it is asking “that Section 1981 in our case be interpreted the same way it has been interpreted for decades across the country.”

--With assistance from Greg Stohr.