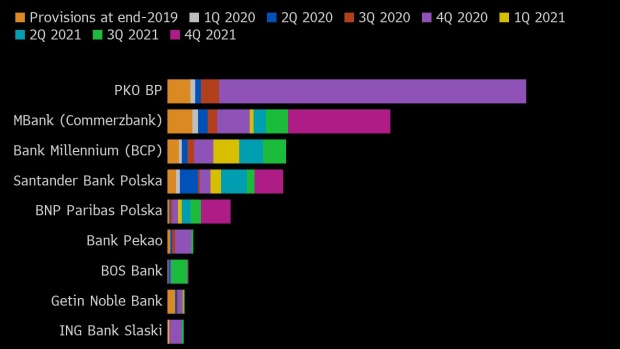 A pedestrian passes an MBank SA bank branch, operated by Commerzbank AG, in Warsaw, Poland, on Tuesday, Oct. 8, 2019. The Polish government's drive to "re-Polonize" the economy is taking aim at one of the country's largest foreign-owned lenders, put on the auction bloc by Commerzbank. Photographer: Piotr Malecki/Bloomberg , Bloomberg

(Bloomberg) -- MBank SA’s decision to clean up its portfolio of toxic Swiss franc loans again raises the prospects of Commerzbank AG trying to sell its $4.6 billion Polish unit after abandoning a similar plan two years ago.

Poland’s fourth-biggest lender set aside 2 billion zloty ($496 million) against the onrush of lawsuits over the mortgages that courts found include clauses that put borrowers at a disadvantage. The provisions are the biggest indication yet that MBank is ready to follow other Polish peers in trying to resolve the legacy of its foreign-currency lending.

The legal saga and the pandemic had clobbered the bank’s valuation and prevented Commerzbank from selling its unit in 2020. Yet after trading below its book value for most of the past three years, MBank shares more than doubled in 2021 as investors bet that interest-rate hikes will boost bank profits.

“This could be a first step to clean up MBank,” said Tomasz Noetzel, an analyst at Bloomberg Intelligence. “But the valuation may yet not be at the level to make an attractive case for Commerzbank to dispose of a revenue-generating asset.”

Commerzbank spokesperson declined to comment. Chief Executive Officer Manfred Knof told Handelsblatt last month that MBank is “an integral part” of the Commerzbank group, while its earnings and costs are “fully” factored in the financial planning for the coming years.

MBank’s exit from franc loans may not be quick and painless. It’s lagging peers, such as state-owned PKO Bank Polski SA, in rolling out an out-of-court settlement program to offer clients in lieu of protracted legal battles. Furthermore, the interest in converting loans from Swiss currency into the zloty could wane in the face of rapidly rising local interest rates.

Chief Executive Officer Cezary Stypulkowski had for years taken a hardline approach in the standoff with holders of foreign-currency mortgages, saying individuals should be responsible for their financial decisions after the value of such loans ballooned. Its write-offs, which pushed MBank into the red for 2021, now amount to about a third of its legacy portfolio, in line with industry practices.

Last year, MBank began to recognize Swiss-franc loans as “non-core” assets and in November said it would gradually increase provisions for legal risks. In the end, though, the lender decided to adopt a “kitchen-sink” approach in the hope that it’ll stabilize future earnings as the industry benefits from higher official interest rates.

“There’s still much uncertainty how to value MBank’s legacy portfolio, especially as client appetite for settlements may fade amid rising interest on zloty loans,” said Kamil Stolarski, an analyst at Santander Bank Polska SA. “For sure, the overall situation of Polish banks is much better now than two years ago, but the price expectations of Commerzbank aren’t known.”