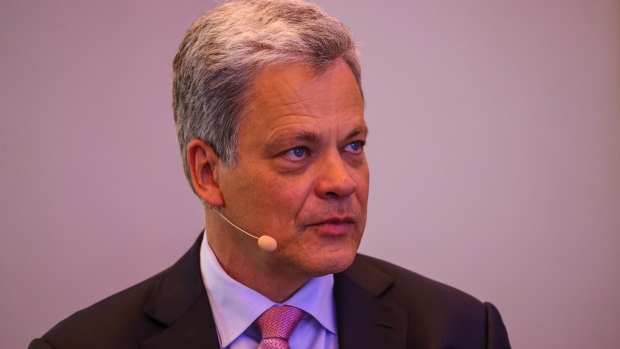 Customers wait to enter a Commerzbank AG bank branch in Frankfurt, Germany, on Friday, Jan. 29, 2021. Germany’s recovery from the coronavirus pandemic will be slower than expected, as extended restrictions hit activity. , Bloomberg

Commerzbank AG saw business decline more than expected in the second quarter, highlighting the challenges for Chief Executive Officer Manfred Knof as he seeks to grow the lender amid deep cost cuts.

Revenue fell 18% from a year earlier and net income slumped to a loss of 527 million euros, both worse than analysts polled by Bloomberg had modeled. The bank reiterated a forecast for revenue to increase slightly this year and said a key measure of capital strength will probably come in better than expected.

Knof in February embarked on a deep restructuring, aiming to restore profitability by cutting 10,000 jobs and lowering costs by a fifth. The CEO has chalked up a few successes -- he has signed an agreement on the cuts with the workers’ councils and another one with Oddo BHF to outsource equities trading -- but he has also faced a number of setbacks, including unexpected expenses and turmoil in the top ranks.

His strategy is to lower expenses to 5.3 billion euros in 2024 while increasing revenue by 6% to 8.7 billion euros. Commerzbank initially expected the cutbacks to result in declining top line this year, but it changed the outlook to a slight expansion after rapid growth in the first quarter on the back of the global boom in capital markets.