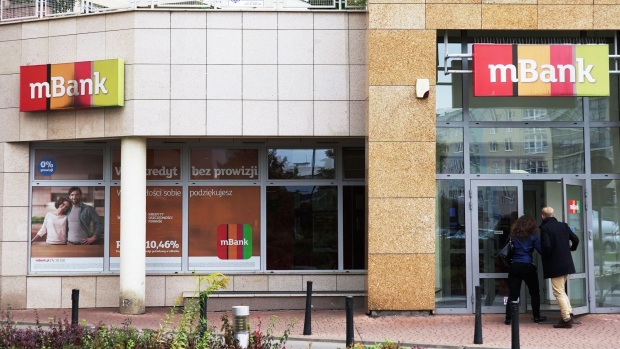 Customers enter an MBank SA bank branch, operated by Commerzbank AG, in Warsaw, Poland, on Tuesday, Oct. 8, 2019. The Polish government's drive to "re-Polonize" the economy is taking aim at one of the country's largest foreign-owned lenders, put on the auction bloc by Commerzbank. , Bloomberg

(Bloomberg) -- MBank SA is testing the waters for out-of-court settlements with holders of Swiss-franc mortgages in a bid to end protracted legal disputes that hurt its profits and played a big role in the decision of its parent Commerzbank AG to abandon plans to sell the Polish unit.

A three-month pilot program called “Let’s meet halfway” will offer 1,300 clients an opportunity to switch Swiss franc mortgages into zloty. It could be expanded at a later date depending on the feedback from clients.

The terms include splitting the conversion costs of the loans between MBank and its borrowers, a solution less favorable for clients than the one pushed by the country’s financial watchdog KNF, according to analysts at Erste Group Bank AG.

The regulator has been prodding the industry to reach out to holders of foreign-currency mortgages, who have seen the value of their loans balloon as the Swiss franc soared 80% against the zloty in the past two decades. Many have sued the banks and won, leaving the industry with mounting provisions for legal risk.

PKO Bank Polski SA, the country’s largest lender, began offering settlements to its clients in October. Bank Millennium SA, a unit of Banco Comercial Portugues SA, said on Monday it wants to reduce its exposure to legacy foreign-currency mortgages to around 7% of all loans in 2024 from the current 14%.

MBank Chief Executive Officer Cezary Stypulkowski has long been reluctant to get into settlements with Swiss franc mortgage holders, leaving the cases to be fought out in courts. It faced 12,150 lawsuits at the end of September, the highest number among Polish banks.

The potential costs of resolving mBank’s legal issues have long been a source of uncertainty for Commerzbank. The failure to come up with a solution for Swiss franc mortgages was a reason why the German lender aborted its attempt to sell MBank last year.