Commodities are the latest hot commodity

Energy and commodities futures swooned under the weight of inflation fears and concerns about the resilience of Chinese demand, raising doubts about the prospects for a much-vaunted commodity “supercycle.”

Oil, copper, soybeans and almost every other futures contract linked to industrial and agricultural staples retreated on Wednesday amid a broader market meltdown afflicting everything from cryptos to equities. 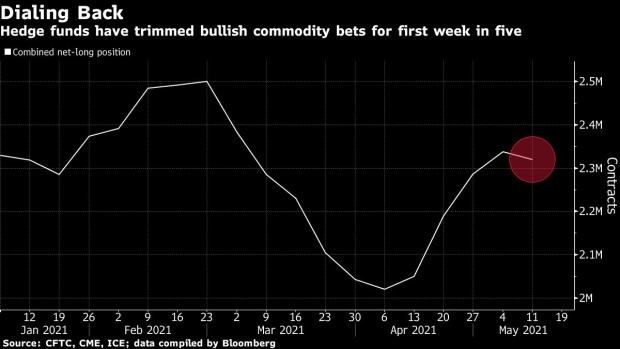 The specter of an inflationary contagion is heightening concern that central bankers will curb monetary stimulus, knocking out on the key pillars of a rally that drove commodities to a nine-year high last week. Traders also were spooked by comments from China’s chief administrative panel calling for tougher oversight of commodity markets and protecting consumers from soaring prices.

“Concerns about higher inflation that could threaten or even derail the recovery of the global economy seem to have gained the upper hand today,” said Daniel Briesemann, an analyst at Commerzbank AG. “This has led to higher risk aversion among market participants as can also be seen by falling stock markets.”

The surge in raw materials costs has had far-reaching impacts as consumers were socked with higher grocery bills and homebuilders struggled to manage sky-high lumber prices. Sanderson Farms Inc., the third-largest chicken producer in the U.S., may shelve plans to build a new processing plant in response to elevated prices for steel and other building materials.

Investors will be closely scanning minutes from U.S. Federal Reserve deliberations at 2 p.m. Eastern time for clues on the outlook for any anti-inflationary measures.

Even before Wednesday’s sell off, money managers had dialed back bets on rising commodity prices for the first time in over a month, according to the latest Commodity Futures Trading Commission and Intercontinental Exchange data on 20 raw materials compiled by Bloomberg.

Crude fell as much as 5.4 per cent in New York, the steepest intraday decline in more than six weeks. Swelling U.S. stockpiles added to concerns that Iran may soon pour more crude onto global markets as part of a revived nuclear deal.

Meanwhile, copper dipped, leading a decline among industrial metals. Copper for three-month delivery on the London Metal Exchange fell as much as 4.1 per cent to US$9977.50 a ton, the most since March 4. Other LME metals also dropped, with zinc declining from its highest close in nearly three years.

See how other commodities traded: