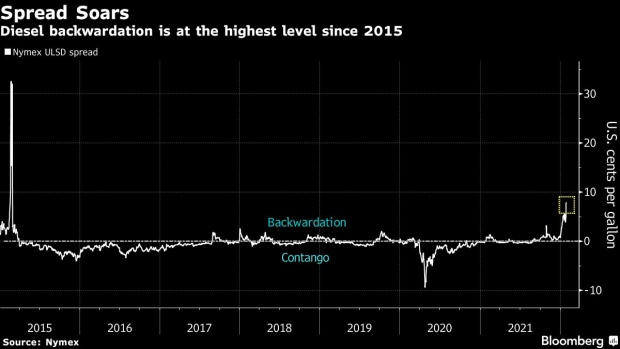 (Bloomberg) -- Just like stocks and bonds, commodities markets had their share of gyrations this past week as geopolitical tensions over Ukraine and Russia, a more hawkish turn by the Federal Reserve and the promise of a powerful snowstorm in the U.S. rattled traders. Here are some of the most notable moves across commodities this week.

Natural gas futures for March delivery climbed 8.3% on Friday to close at $4.639 per million British thermal units as a so-called “bomb cyclone” approached the East Coast. The increase followed a historic advance of as much as 72% in the expiring February contract on Thursday, a sign of a classic short squeeze as traders exposed to wrong-way bets on lower prices rushed to close out those positions. For the five-day period, futures surged 16%, the biggest weekly advance since August 2020.

Supply constraints and geopolitical tensions weighed on crude over the five-day period, with prices rising for a sixth straight week. West Texas Intermediate futures settled just shy of $87 a barrel, taking their advance for the week to about 2% as robust demand tightened global markets. Brent also rallied to settle above $90 a barrel. Meanwhile, a growing chorus of Wall Street banks and oil executives are forecasting a return to $100 oil.

Ultra-low sulfur diesel futures for prompt delivery are trading at the widest premium over next-month deliveries in nearly seven years. The bullish structure known as backwardation comes as the threat of a powerful winter storm boosted heating demand across the U.S. Northeast. Diesel stockpiles in the central Atlantic region fell to 19.7 million barrels last week, a seven-year seasonal low, according to EIA data.

Soybeans closed the week at the highest price since May as crop woes in South America boost prospects for global demand of U.S. oilseeds. Beans for March delivery in Chicago rose 1.5% to $14.70 a bushel. Soybean oil reached the priciest level since June and soybean meal also climbed.