A gauge of commodities soared to an all-time high as a resurgence in demand for raw materials collides with supply constraints, working to fan fears of inflation around the world.

The Bloomberg Commodity Spot Index, which tracks 23 energy, metals and crop futures contracts, rose 1.1 per cent on Monday, topping a 2011 record. The index has surged more than 90 per cent since reaching a four-year low in March of last year.

Among the biggest gainers are energy commodities such as natural gas, which has surged amid shortages in both Europe and China that are threatening to spread to other parts of the world. Oil jumped to the highest in almost seven years on Monday after OPEC+ decided to maintain a gradual supply increase even as the gas crisis is set to boost demand for crude to generate power. 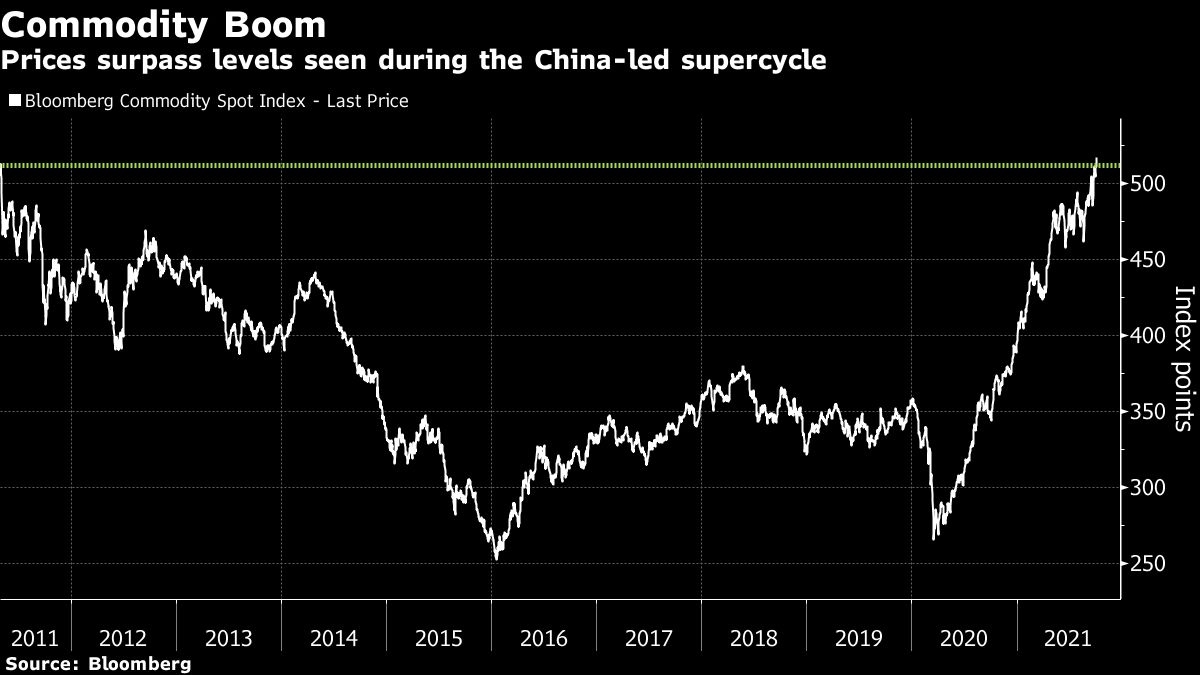 Meanwhile, the reopening of major economies has unleashed pent-up demand for transportation fuel and all commodities used in manufacturing. That’s happening at a time when new mining and oil developments have stalled, China is replenishing crop stockpiles and bad weather is hurting top exporters of agricultural goods.

Aluminum and copper have surged because of short global supplies, and a drought in Brazil has pushed up the cost of coffee and sugar. Cotton futures last week rose to the highest in a decade because of poor weather and shipping bottlenecks, driving up costs for clothing around the world.

Persistent fiscal deficits and low interest rates have also made commodities more attractive to investors seeking a hedge against inflation. The price shocks have already drawn comparisons with the mix of economic stagnation and oil-driven inflation that dominated the 1970s, dubbed stagflation. 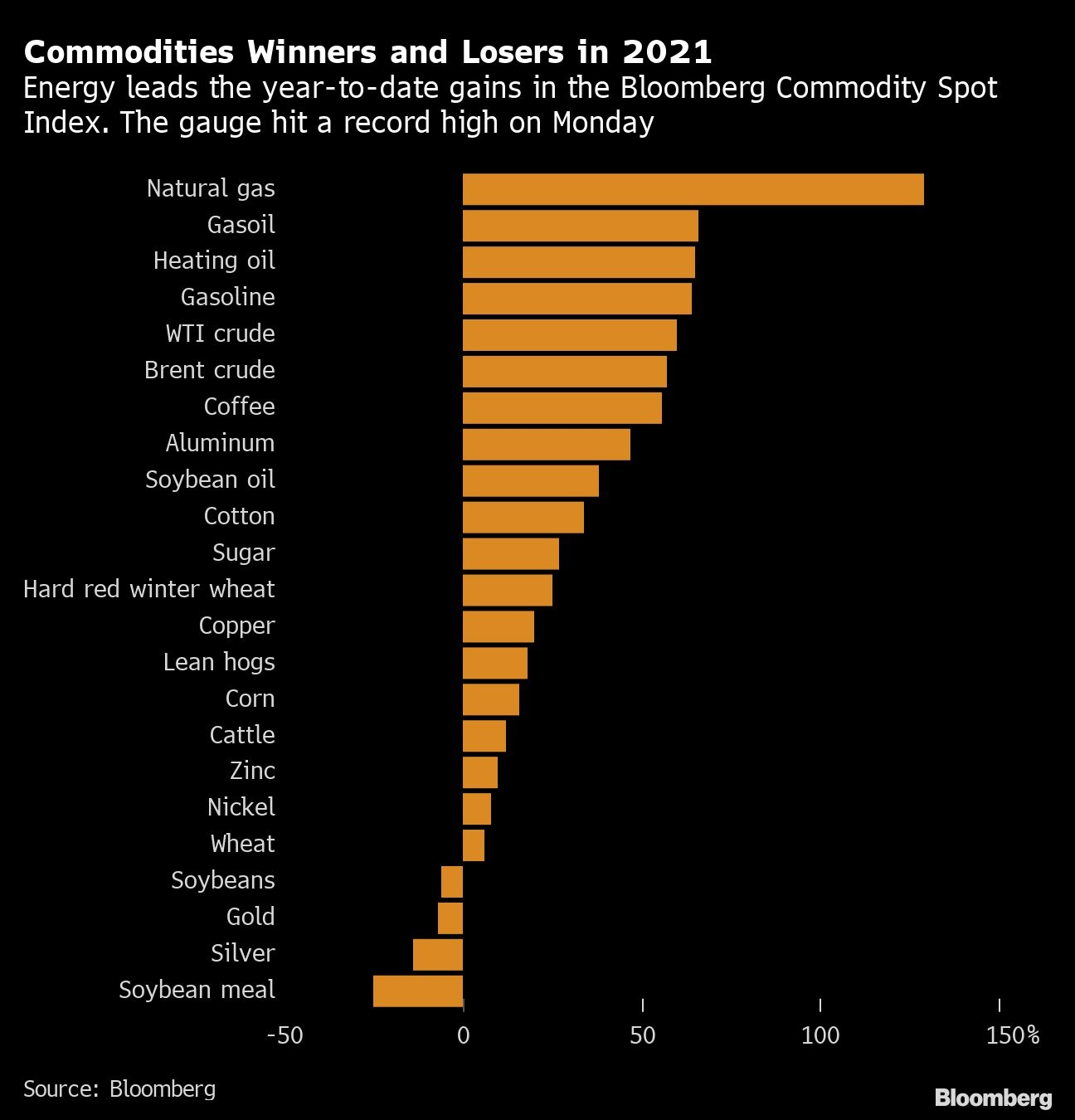 Paradoxically, the inflow of funds into commodities has only helped fuel the very thing investors are seeking protection from. This year’s commodities rally has pushed up the cost of everything from gasoline and new-build housing to meat and cars. That’s helped move the debate about inflation center-stage and led policy makers to consider scaling back massive injections of cash into the economy.

Among commodities mavens, there are conflicting views over how much higher the rally can go. Some banks including JPMorgan Chase & Co. have floated the idea that commodities are entering a supercycle -- a long-term upward trend. Some bulls point to the energy transition, which may bring massive investments in new infrastructure and specifically increase the need for metals in batteries, solar panels and wind turbines.

But as with any commodities boom, the price rallies are almost certainly sowing the seeds of their own eventual demise by encouraging investments in new supply. For example, Century Aluminum Co. is increasing production capacity for the metal at a South Carolina smelter, while in June, the Democratic Republic of Congo disclosed talks to reopen a cobalt mine in the country.

Despite U.S. oil producers pledging to keep a lid on their output, the OPEC+ alliance has the potential to add millions of barrels of daily supplies. Furthermore, COVID-19 continues to prevent a full return to normal economic activity across much of the world, with the potential to once again hobble energy demand.

The price jump has already fizzled for some commodities after supply concerns proved overblown. Soybean meal and lumber, which surged earlier in 2021, have erased gains for the year. Gold has fallen as central banks signal they’ll reduce stimulus and the dollar strengthens, reducing bullion’s safe haven appeal.

This year’s price gains have led China to start a campaign to rein in prices by ordering state-owned enterprises to limit their exposure to overseas commodities markets and selling metals including copper, aluminum and zinc from state stockpiles.

With the power crisis and restrictions on pollution, Chinese production of steel has plunged, reducing demand for iron ore.

Goldman Sachs Group Inc. has said the country’s efforts will likely be in vain because China is no longer dictating commodities pricing, given the strength of demand coming from the U.S. and Europe.