Prices from crude and nickel to aluminum and wheat soared, as raw materials stage their most stunning weekly surge since 1974, during the days of the oil crisis.

Russia’s growing isolation is choking off a major source of energy, metals and crops, sparking fears of prolonged shortages and accelerating global inflation. Traders, banks and shipowners are increasingly avoiding business with Russia because of the difficulty in securing payments, while shipping lines are shunning bookings from the region. 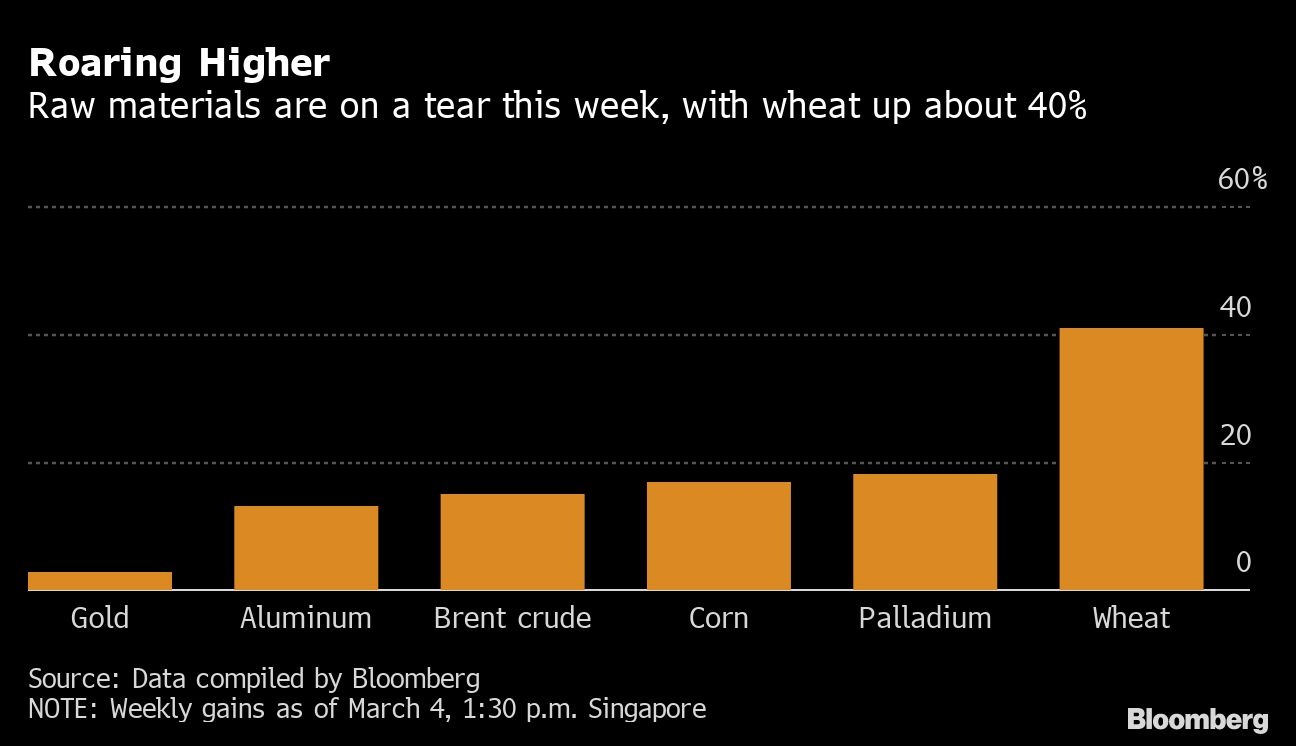 West Texas Intermediate oil jumped as much as 5.7 per cent Friday before paring gains as traders assessed the severity of the nuclear plant attack. Prices are still up about 22 per cent this week as many global buyers avoid Russian crude and fuels, sparking a race for alternative supplies.

The International Energy Agency warned that global energy security is under threat, and a planned release of emergency oil reserves by the U.S. and other major economies has failed to quell supply concerns. JPMorgan Chase & Co. said global benchmark Brent crude could end the year at US$185 a barrel if Russian supply continues to be disrupted. Prices were at about US$114 on Friday.

Wheat soared to the highest level since 2008 on deepening fears of a global shortage as the Ukraine war cuts off about a quarter of the world’s exports of the staple used in everything from bread to cookies and noodles. Milling wheat in Paris reached an unprecedented 400 euros (US$438) per ton.

Base metals also rallied further after the LMEX Metals Index, which tracks six major contracts, surged to a record on Thursday. Soaring energy prices have added to the momentum by pushing up costs. Aluminum, one of the most energy-thirsty metals, rose as much as 4 per cent to US$3,867 a ton on the London Metal Exchange, a fresh record, while nickel, another key battery metal, jumped sharply in London to briefly trade above US$30,000 a ton for the first time since 2008.

Copper is also closing in on its all-time high. Stockpiles in warehouses tracked by the LME fell back to the lowest since 2005.

The war and the implications of sweeping U.S. and European sanctions on Russia have upended Black Sea supplies at a time when global stockpiles of raw materials are already tight. Russia is a major supplier of crude, natural gas, grains, fertilizers and metals such as aluminum, copper and nickel.

Higher commodity prices have the potential to depress growth and stoke inflation, creating a dilemma for central bankers worldwide as they weigh the need to increase borrowing costs against the risk of stunting the economic recovery.

In other commodities, benchmark European gas climbed as much as 33 per cent to a fresh record and is set to double this week.