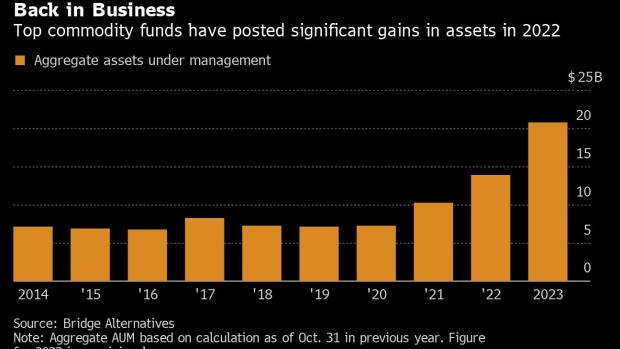 Aluminum ingots sit in a warehouse storage facility at the Krasnoyarsk aluminum smelter, operated by United Co. Rusal, in Krasnoyarsk, Russia, on Monday, Sept. 3, 2018. The season for aluminum producers and buyers to hash out U.S. sales contracts has started much earlier than usual this year thanks largely to uncertainties over sanctions on United Co. Rusal. Photographer: Andrey Rudakov/Bloomberg , Bloomberg

(Bloomberg) -- After years out in the cold, investors are finally warming to commodity hedge funds again as wild price swings and talk of a new supercycle draw interest back to the sector.

The top 15 commodity-focused hedge funds have increased their assets by 50% this year to $20.7 billion, according to preliminary data from Bridge Alternative Investments Inc. Some recent entrants have already closed to new investors, and big macro funds are hunting for talent as they beef up commodities teams.

But while the money floods in, the list of names bears little resemblance to the elite cadre of managers who once dominated the market. Storied traders such as Andy Hall, so revered in the oil industry that some called him “God,” have been replaced by a new breed of lower-profile, technically focused quantitative investors.

Among the biggest are Quantix’s Commodities Alpha Fund with $1.7 billion and Pimco’s Commodity Alpha Fund with more than $2 billion, according to people familiar with the matter. East Alpha and Statar Capital are also major players.

It’s a far cry from the days when legendary names such as Willem Kooyker commanded more than $9 billion. In the boom era of the 2000s, firms such as Red Kite, Clive Capital LLP and Blenheim Capital Management LLC managed vast piles of cash in raw materials. Insatiable Chinese demand sent prices soaring, rewarding the kind of big directional bets the hedge funds were famous for.

“There are some people who are coming back to commodities for the first time in 10 to 15 years,” said Jay Tatum, who runs metals fund Valent Asset Management LLC, which has closed to new investors after notching up more than $1 billion in assets. “There just aren’t that many options.”

Still, some of the old-guard managers are also getting back into their stride again under different firms. Drakewood Capital Management, run by metals industry veteran and Red Kite co-founder David Lilley, says it has closed its fund to new investors with assets above $1 billion and is working on a new fund that will include physical metals investments.

Orion Commodities Fund LP, part of Oskar Lewnowski’s Orion Resource Partners, has also seen fresh investment, with $1.6 billion under management at the end of October, according to an industry report. Lewnowski is a former Red Kite co-founder who parted ways with the London-based fund in 2013 at a time when many rivals were shutting up shop.

The whole Orion group now manages about $7.8 billion -- roughly twice as much as Red Kite did at its peak in the early 2010s.

Much of the cash in the commodity space is being deployed by huge macro funds -- those that try to profit from broad market moves triggered by political or economic events -- which are bolstering their specialist teams as a result. Rokos Capital Management, Balyasny Asset Management and Bluecrest Capital Management have all added commodity traders this year.

Finding the right people isn’t easy though, especially after many banks scaled back or exited commodities trading altogether. Their sell-side desks were previously a key source of hires for hedge funds.

“The toughest thing for us is continuing to find the right talent,” said James Purdie, head of investor relations at Arion Investment Management Ltd., which trades just under $100 million in metals and energy markets. “There’s a lot more competition now.”

With money flooding in, the pressure is now on commodity hedge funds to show they can navigate today’s turbulent markets and avoid the large losses that hobbled the industry in the past. While the old guard were famous for a bold and risky style of trading, some of the biggest funds today employ strategies aimed more at delivering reliably strong returns, even during choppy markets and harsh industry downturns.

So far, the top tier haven’t stumbled. The largest 15 commodity hedge funds have posted gains of 10.5% this year, following two years of returns above 20%, according to Bridge Alternatives.

The hedge fund industry has also changed markedly, with giant firms like Citadel and Millennium Management -- which employ hundreds of dispensable traders across many markets -- now dominating the scene. That leaves less space for the kind of star managers who characterized the last commodities supercycle.

For now, new fund launches in the space remain relatively rare, even though there’s plenty of investor cash available to seed them. Eventually that could result in more entrepreneurial money managers going it alone in the hope of becoming this era’s superstars.

“There is a lack of supply of commodity hedge funds,” said Ryan Duncan, managing partner at Bridge Alternatives. “If there is enough demand and there is not enough supply, you will see some groups launch their own vehicles.”

Yet the losses of the past decade are still fresh in the minds of capital allocators who dabbled in commodities. Many gave cash to funds that were vulnerable to large downturns in the market.

“You had investors who seemed be using the wrong playbook,” said Valent’s Tatum. Now “wisdom has been gained within the industry.”

--With assistance from Nishant Kumar and Devika Krishna Kumar.