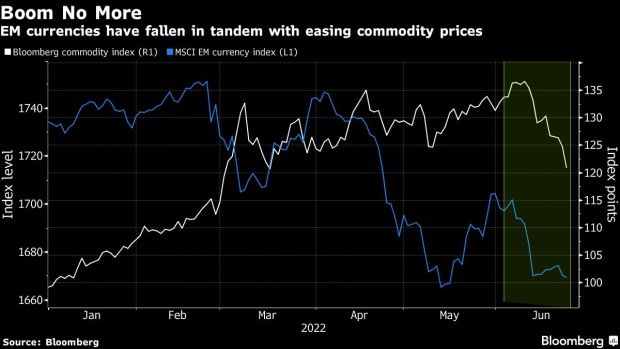 A natural gas flare burns near an oil pump jack at the New Harmony Oil Field in Grayville, Illinois, US, on Sunday, June 19, 2022. Top Biden administration officials are weighing limits on exports of fuel as the White House struggles to contain gasoline prices that have topped $5 per gallon. , Bloomberg

(Bloomberg) -- The most popular trade in emerging markets this year -- betting on commodity-exporting nations -- is losing its appeal.

The currencies and bonds of Brazil to Mexico and South Africa were the best performers among developing-nation peers in the first five months of 2022 as commodity prices skyrocketed following Russia’s invasion of Ukraine. They have turned laggards this month after growing fears of a global recession and China’s Covid lockdowns sent a Bloomberg gauge of raw-material prices tumbling 10% from an eight-year high.

The fizzling of the commodity-led rally comes at a crucial point for emerging-market investors as the Federal Reserve’s tightening saps liquidity and worsens the outlook for riskier assets. They have nowhere to hide as the other half of the developing world -- commodity importers mainly in Asia -- are also witnessing a selloff amid stubborn inflation and delayed rate-hike plans.

“We are closer to the end of the emerging-market commodity boom than the beginning or even the middle,” said Todd Schubert, head of fixed-income research at Bank of Singapore. “The rising risk of a severe economic downtown will further sap demand for a broad swath of commodities.”

The Brazilian real, which rallied 18% in the year through May, has plunged about 10% in June. A similar reversal has happened in the Chilean and Colombian pesos and the South African rand. Their losses have sent the emerging-market currency benchmark toward the worst quarterly losses in more than two years.

“I would be more defensive on commodity currencies right now, as it seems that slower global growth and the search for peak inflation globally continues to weigh on the commodity space,” said Galvin Chia, EM FX strategist at Natwest Markets in Singapore.

Citigroup Inc. is urging investors to bet on further gains in the dollar against developing currencies, which “may see more broad-based weakness with commodity prices declining,” strategists including Dirk Willer and Luis Costa wrote in a report Thursday.

“Resilient commodity prices and high interest-rate differentials have been favorable for Latam currencies” versus the other regions, they said. “This distinction may start to blur with growth concerns weighing on commodity prices too.”

Raw-material prices have been at the mercy of global growth concerns, as policy makers have only one main goal -- to tame runaway inflation -- even at the risk of tipping economies into a recession. That’s making some investors say the losses will only deepen from here.

“When it comes to the outperformance of the commodity darlings in Latin-America, it is as good as it gets,” said Witold Bahrke, a Copenhagen-based senior macro strategist at Nordea Investment, adding that the asset manager has reduced exposure to Latam credit risk via credit default swaps.