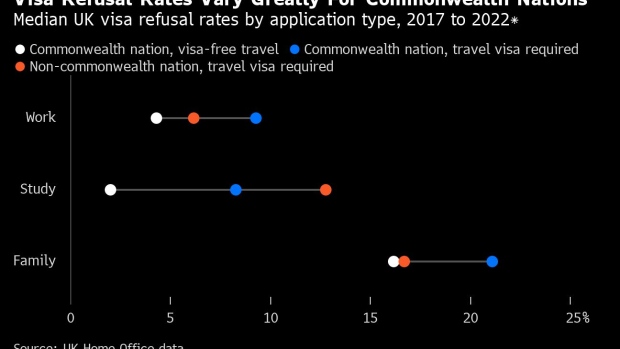 (Bloomberg) -- Commonwealth countries may have hoped that the British government’s promise to focus on the rest of the world after leaving the European Union would make it easier for members of the 54-member organization to live and work in the UK. But that hasn’t happened.

A Bloomberg News analysis of UK Home Office visa applications between 2017 and 2022 (excluding 2020, the pandemic year) found that refusal rates for study, work and family or dependent-related applications from Commonwealth countries exceeded those of nations outside the group.

When it comes to work visas specifically, less than 6% of applications from China, Mexico, Russia or Saudi Arabia were rejected during that period, compared to more than 10% for some African Commonwealth members including Cameroon, Uganda and Tanzania.

What’s more, the analysis also found large disparities in refusal rates among Commonwealth countries themselves, with the most restrictive rates frequently occurring in Africa.

In Kenya, for example, the rejection rate for work visas was 8%, or nearly four times higher than in Australia or Canada, where fewer than 2% were turned down. Citizens of the latter two nations are free to visit the UK for trips lasting as long as six months, whereas those from Kenya need to apply for visas to step foot in the UK for any amount of time.

For Commonwealth countries where UK visas are required for travel, visa applications for work, study and dependent family members are also rejected at higher rates. In Cameroon, a Commonwealth member since 1960, the rejection rate for study visas was 27.2%, or roughly 50 times higher than rejection rates in Malaysia or Singapore, where about 0.5% of study visas are turned down.

The death of Queen Elizabeth II, under whose reign the former colonies the British Empire evolved into the self governing nations of the Commonwealth, has prompted a good dose of soul searching. Many members are now asking what purposes the organization serves.

A special visa program could help address that, according to David Lawrence, a research fellow at Chatham House, a London-based international affairs policy institute.

“Migration is one area where the UK could spearhead something that offers tangible benefits. It would be interesting to see a Commonwealth visa, perhaps something that makes it easier for individuals to visit, study, and work in the UK,” Lawrence said. “This would help plug some of the labor shortages and reduce the chance of countries wanting to leave the Commonwealth.”

The disparities in acceptance rates may stem from a number of causes according to immigration experts. One of them could be that countries with which the UK has visa-free agreements also tend to be “closer” partners, according to Lawrence.

But at the heart of it, there’s a mismatch of expectations. Free movement within the EU was highly unpopular in the UK and was a major factor in the vote to leave the bloc. The issue of immigration is again coming to the political fore this year, mostly due to the number of asylum seekers trying to cross the Channel in small boats from France in the absence of formally approved routes to reach Britain.

Net migration to the UK hit a record high of half a million people in the year to 2022, the Office for National Statistics said on Thursday, in what the organization called a “unique” 12-month period.

Having a special visa for skilled Commonwealth citizens should not be a problem so long as the British people believe it is justified, said Heather Rolfe, an immigration integration specialist at British Future, a London-based immigration non-profit.

“If you’ve got skills that the UK needs, it wouldn’t really matter what country you come from,” Rolfe argued. “The question would be why the preference for Commonwealth countries. However, employers might consider it as a good idea especially if it benefits them financially by way of lower visa costs.”