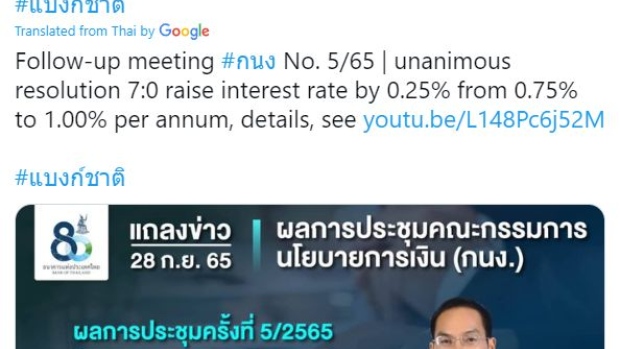 (Bloomberg) -- Analysts disappointed with the gradual pace of Thailand’s monetary policy tightening may be missing the point if they’re only looking at interest-rate actions, according to a central banker.

Going by Bank of Thailand Assistant Governor Piti Disyatat’s suggestion, they should also take note of the authority’s open-mouth operations -- the spoken or written words communicated by the central bank to direct market expectations.

“Monetary policy is 90% communication and 10% action,” Piti, 49, said in an interview. More than a year ago, he took the job of relaying policy decisions as secretary of the Monetary Policy Committee and has since revamped the BOT’s communications strategy as it aspires to be more transparent, accessible and forward looking.

Among Asian central banks, BOT has one of the most visible communication strategies. While its officials give policy speeches as often as their peers in the Philippines and Indonesia, Thai authorities have been especially active on social media, using it to manage expectations in the wake of global policy events such as a Federal Reserve meeting.

The BOT, which has nearly 750,000 followers on Facebook, has grown its online presence to platforms including Line, Twitter and Instagram to better explain itself to the public. A day before the Fed’s meeting in September, the Thai central bank used a niche local social media app, Blockdit, to say why a gradual normalization of policy was worth the wait.

A day after the Fed’s move, the BOT followed up with a post to argue why a large hike was not appropriate for Thailand, even as the Philippines and Indonesia delivered half-point hikes and Vietnam moved by 100 basis points. Nearly a week later, the BOT increased borrowing costs by 25 basis points in a scheduled meeting, in line with its forward guidance for gradual and measured moves.

The BOT will “not deliberately surprise the market,” Piti said, referring to the bank’s guidance for gradual moves. At the same time it won’t be a factor to stop it from “doing what we think is needed.”

Piti, who previously worked at the Bank for International Settlements and the International Monetary Fund, steered the communications strategy of the 80-year-old BOT to align it with the Fed and the European Central Bank’s approach of announcing the decision 30 minutes before it holds a media briefing. The BOT also started broadcasting the post-policy question and answer session via Facebook Live instead of only reading out the decision statement earlier.

The policy rate statement is now tailored to be more forward-looking rather than explanatory, and spells out a clear pathway for the economy and inflation and the likely course of monetary policy. The central bank is trying to lay out “its preferences,” so the market and the public can understand how it would react to different economic situations, Piti said.

It’s a model also followed by monetary authorities in Sweden, Czech Republic and New Zealand, he said, adding that Thailand doesn’t plan to give interest-rate forecast like other countries on concerns about miscommunication.