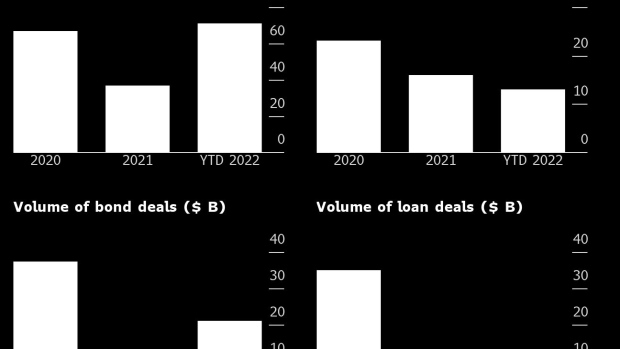 A monitor with stock market information on the floor of the New York Stock Exchange (NYSE) in New York, U.S., on Monday, June 27, 2022. Money managers betting on a sustained global rebound will be left sorely disappointed in the second half of this crushing year as a protracted bear market looms, even if inflation cools. Photographer: Michael Nagle/Bloomberg , Bloomberg

(Bloomberg) -- Global companies have pulled more debt sales in the past six months than in all of 2020.

While that’s as far back as our data goes, it’s likely been several years since so many companies withdrew from the market, given the recent era of cheap and plentiful money.

“Raising equity together with debt to fund acquisitions is becoming harder for companies,” said Carlo Fontana, head of global syndicate at UniCredit SpA.

When large companies come to the bond market, they’re having to accept less attractive terms. Germany’s state development bank, Kreditanstalt fuer Wiederaufbau, paid its most expensive premium yet to sell green bonds this week, showing that costs are rising sharply for even the safest of borrowers.

Green Bonds Come at an Expensive Premium for Germany’s KfW

Here are a few more takeaways from the first half:

“For Europe, the situation is even more challenging given the gas squeeze and terms of trade developments that have lifted gas and electricity prices,” according to a report by asset manager Robeco.

Click here for a worksheet of pulled deals including IPOs, M&As, bonds, loans and ABS in 2022.

Click here for a worksheet of postponed bonds and loans in 2021 and here for 2020.