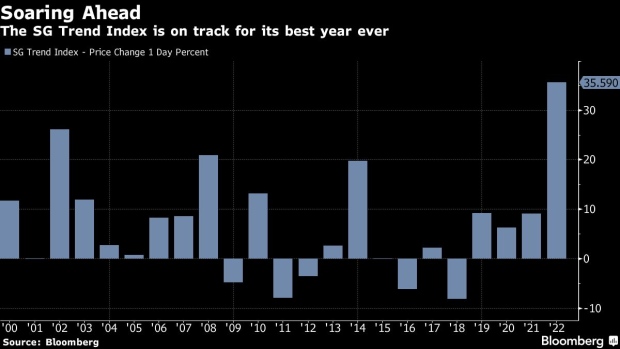 LONDON, ENGLAND - SEPTEMBER 26: People queue for a Bureau de Change on September 26, 2022 in London, England. The British Pound continued its slide against the US dollar today, fluctuating between $1.03 and $1.07 this morning. Earlier this month, it dropped below the $1.14 mark for the first time in four decades. (Photo by Chris J Ratcliffe/Getty Images) , Photographer: Chris J Ratcliffe/Getty Images Europe

(Bloomberg) -- A $200 billion corner of the hedge funds industry dominated by computer-driven algorithms has been making the most of wild swings in global markets, putting many of those funds on course for a record year of gains.

Aspect Capital’s Diversified Programme returned 5.2% last month to bolster its gains for this year to nearly 44%, according to an investor document. Tulip Trend Fund rose more than 58% through September, while the Lynx fund was up in excess of 45%, according to updates on their websites.

The funds, which use computing power to analyze vast amounts of data to predict the direction of stocks, bonds, currency and commodities markets, are emerging as one of the biggest winners among hedge fund strategies this year as soaring inflation and rising interest rate spark the volatility they thrive on.

Investors are piling in as they see these funds as a way to guard their portfolios against unforeseen shocks. They allocated a net $7.4 billion to them through August, while the industry as a whole suffered almost $45 billion of outflows.

“Things are breaking,” said Douglas Greenig, whose firm Florin Court Capital in London runs a quant funds that’s up 24% this year. “In this context, investors need some strategies to own the tails,” he said referring to investment strategies that try to limit losses or even gain in extreme markets.

Systematic trend-following quants won a big following after gliding through the 2008 global financial crisis with double digit gains. They are now bouncing back from years of mediocre gains amid muted volatility caused by quantitative easing. That’s now reversing.

The SG Trend Index, which measures returns of some of the largest quant funds in the world run by investment firms such as Winton, Systematica Investments and AQR Capital Management, rose almost 36% through September, putting it on course for its best year ever.

Traders are betting on the pace and extent of rate hikes, leading to a more persistent sell off in stocks and rise in bond yields. The quant funds are riding that trend to provide investors with a cushion against sharp losses elsewhere.

UK Chancellor of the Exchequer Kwasi Kwarteng announced tax cuts in a mini budget which sparked a dramatic plunge in pound and sharp rise in bond yields, sending shockwaves across global markets. That provided further trading opportunities for the algorithms who are designed to quickly pick such momentum trades.

Most of the gains at Aspect’s flagship fund last week were because of bonds and currencies trades, the $10.6 billion firm said in a letter seen by Bloomberg.

“Given the widespread tightening of economic conditions with so many significant rate hikes during the month, the portfolio was able to benefit from short, fixed income exposures across the entire US Treasuries curve, across UK fixed income, as well as across German, Canadian and Korean bonds,” Razvan Remsing, Aspect’s director of investment solutions, said.

At the Tulip Trend fund, returns rose 11% in September as the strategy benefitted from short bets on U.S. bonds, gilts and the pound, according to its investor letter. The Lynx fund gained 9.3% during the month, putting it on track to match or exceed its record gain of 38% in 2008.

With inflation rising, traders are betting that central banks will have to continue tightening rates and removing liquidity. Greenig of Florin Court said the main question is whether the macro environment has settled, or remains unstable.