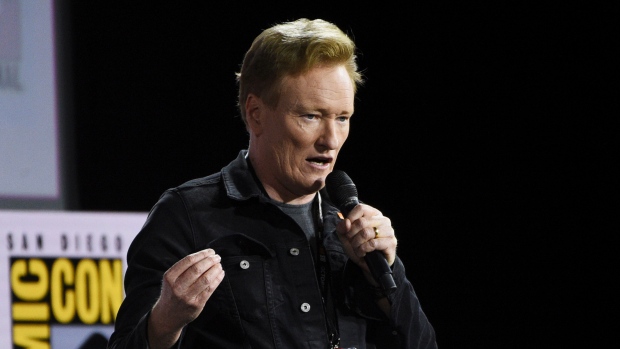 In this July 18, 2019, file photo, Conan O'Brien introduces Tom Cruise to present a clip from "Top Gun: Maverick" on day one of Comic-Con International in San Diego. , The Associated Press

Conan O’Brien is ending his late-night talk show to host a weekly variety series for HBO Max, underscoring the shifts in the TV industry.

One of the longest-tenured hosts in U.S. late-night TV, O’Brien will wrap up his self-titled show in June, the culmination of its 10th season on TBS. O’Brien, a former writer for “Saturday Night Live” and “The Simpsons,” has been a late-night host for 28 years in total. He started as a replacement for David Letterman at NBC, and was named Jay Leno’s successor at the “Tonight Show” for seven months -- before Leno decided to reclaim his old show.

Having rescued O’Brien from a toxic situation at NBC, AT&T Inc.’s WarnerMedia will now ask O’Brien to figure out what a variety show looks like on the internet. Streaming services have struggled to find a recipe for their topical humor programs. Netflix Inc. has cycled through several comedians, including Chelsea Handler, while Hulu briefly put on a late-night show from Sarah Silverman. Letterman also has an interview series at Netflix.

HBO, meanwhile, has found success -- and lots of awards -- with a weekly show from John Oliver, a former contributor to “The Daily Show.”

“In 1993 Johnny Carson gave me the best advice of my career: ‘As soon as possible, get to a streaming platform,’” O’Brien joked in a statement. “I’m thrilled that I get to continue doing whatever the hell it is I do on HBO Max, and I look forward to a free subscription.”