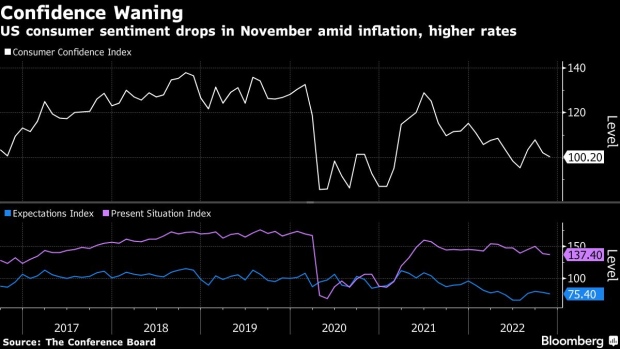 (Bloomberg) -- US consumer confidence fell in November to a four-month low amid the double blow of persistent inflation and rising interest rates.

The Conference Board’s index decreased to 100.2 this month from a revised 102.2 reading in October, data out Tuesday showed. The median forecast in a Bloomberg survey of economists called for a drop to 100.

A measure of expectations -- which reflects consumers’ six-month outlook -- fell to 75.4. The group’s gauge of current conditions decreased to 137.4, the lowest since April 2021.

“The combination of inflation and interest rate hikes will continue to pose challenges to confidence and economic growth into early 2023,” said Lynn Franco, senior director of economic indicators at the Conference Board.

The highest inflation in a generation has forced many lower-income Americans to rely on credit cards and savings. While consumers have so far proved largely resilient, higher borrowing costs are making it more expensive to finance big-ticket purchases.

Buying plans for homes, motor vehicles and major appliances declined during the month, the Conference Board data showed.

Retailers from Target Corp. to Nordstrom Inc. have been dangling steep discounts to clear a glut of inventory, especially for the holiday season. But shoppers so far haven’t flocked to the deals as prices are still relatively high, and doling out more on essentials like food and rent has left many with little leftover for discretionary purchases.

The median inflation rate expected over the next 12 months rose in November to a four-month high, which Franco attributed to food and gasoline prices. The personal consumption expenditures price index, which the Federal Reserve uses for its inflation target, and real consumer spending data for October will be released Thursday.

While consumers were upbeat about current labor-market conditions, they were less so about the outlook. The share of consumers who said jobs were currently “plentiful” rose to 45.8%. However, a greater share expect fewer jobs in the next six months.