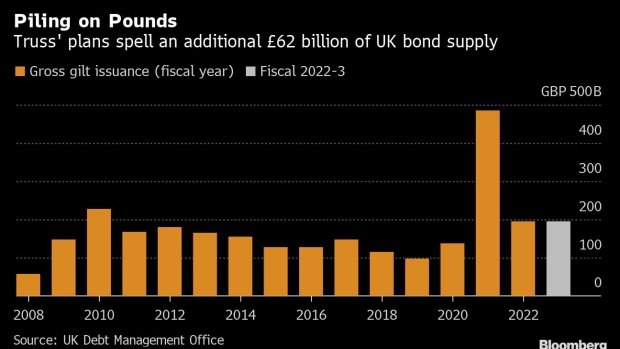 A city worker walks down an alleyway in the City of London, UK, on Friday, Sept. 23, 2022. The UK Government wants to supercharge the City of London's growth, arguing it will boost the whole country's post-Brexit prospects. Photographer: Chris J. Ratcliffe/Bloomberg , Bloomberg

(Bloomberg) -- On a day when losses were cascading across global markets, the UK stood out as the worst of the worst.

Confidence in UK market vanished on Friday as the pound plunged below $1.09 and gilt yields skyrocketed. After Chancellor of the Exchequer Kwasi Kwarteng outlined tax cuts and spending plans, traders expressed dismay about how the British government will be able to fund its radical ambitions. Even more ominous, some questioned the Britain’s financial stability and worried about market dysfunction.

“It was a shock as the details came out,” said Sarah Hewin, a senior economist at Standard Chartered Bank Plc. “Financial markets have said, today at least, that they don’t have confidence.”

The losses were historic by any measure. The pound shed 3.2%. Ten-year gilt yields seeing their biggest one-day surge on record in Bloomberg data through 1989, closing 33 basis points higher on the day at 3.83%. The FTSE 100 Index sank 2%.

“Sterling is in danger,” wrote George Saravelos, the global head of FX research at Deutsche Bank AG. “The very large, unfunded tax cuts and other fiscal giveaways announced by the UK chancellor a few minutes ago only strengthen our worries.”

While traders have long expected that Prime Minister Liz Truss would increase spending and cut taxes, the news on Friday confirmed the true extent of the borrowing binge. The cost of the package is expected to run to £161 billion over the next five years.

UK bond market indicators, such as implied volatility and bid-ask spreads, suggest that liquidity is drying up and market functioning is “impaired,” according to Antoine Bouvet, a senior rates strategist at ING Groep NV.

The additional borrowing required to finance this spending threatens to widen the UK’s budget and current-account deficits. Strategists fear that this forms another pressure on the currency and bonds, as the UK becomes more reliant on external capital flows to finance the shortfall.

The nation’s current-account deficit widened to 8.3% of GDP in the first quarter, the most in data going back to 1997.