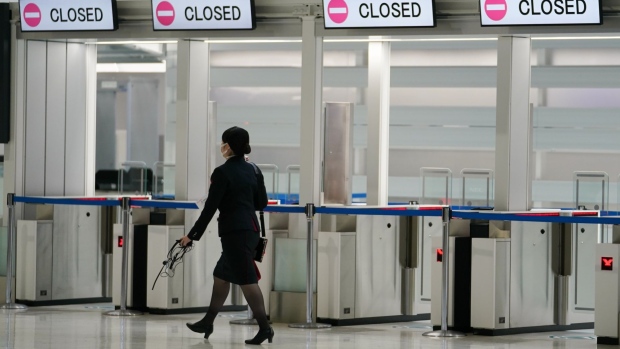 A medical worker wearing personal protective equipment (PPE) waits for a visitor to fill out paperwork at a Covid-19 testing center at Narita Airport in Narita, Chiba Prefecture, Japan, on Tuesday, Nov. 30, 2021. Japan closed its borders to new foreign arrivals from Tuesday and have its own citizens isolate on arrival from countries where the omicron variant has been found, while experts around the world analyze the risks it presents. , Bloomberg

(Bloomberg) -- Japan’s government walked back a ban on new inbound flight reservations, adding to confusion over year-end plans for individuals and businesses as the country seeks to control the spread of the omicron variant.

A blanket suspension of all new incoming flight bookings was dropped on Thursday, a day after it was introduced, but it remained unclear who would be eligible to reserve any remaining seats.

Prime Minister Fumio Kishida is seeking to defend what has become an extended respite in Japan from the worst effects of the pandemic. Any serious new wave of infections could hurt his chances in an upper house election next year, and put him at risk of being replaced in short order, like his predecessor, Yoshihide Suga.

Chief Cabinet Secretary Hirokazu Matsuno said airlines would be instructed to take the needs of returning Japanese nationals into consideration in loosening the ban, giving the impression that resident foreigners might still be kept out if they didn’t already have bookings.

What We Know About Omicron, the New Virus Variant: QuickTake

The lack of clarity is fueling uncertainty and frustration during a period when air travel usually picks up. New Year’s celebrations are traditionally a time for Japanese families to gather or travel abroad, with many looking forward to a break this year after the coronavirus pandemic dashed most peoples’ vacation plans in 2020.

“I can understand the need for quarantine measures, but the government’s sudden measures despite not knowing much about omicron was very jarring for me,” said Takeshi Tetsuo. The 60-year-old insurance agent had been waiting for the right time to book tickets for a visit by his wife and three kids this month. He hadn’t seen his family, who live in Australia, in two years.

Tetsuo said he was considering going to Australia to see his family, but now isn’t sure whether he can get back into Japan. “I have no idea when I’ll see them,” he said.

Japan Airlines Co. said Thursday it was preparing to restart reservations after hearing about the policy change from the government, while ANA Holdings Inc. said it would discuss with the transport ministry how to handle the matter.

The government has capped the number of people allowed to enter the country at 3,500 people a day, and any fresh reservations will only be allowed on days when the upper limit hasn’t been reached, according to a transport ministry official, who asked not to be named, citing policy. He added that it wasn’t realistic to expect airlines to check customers’ nationality before taking bookings.

Japan has faced accusations of discrimination after it banned all foreigners, including residents, from entering the country from South Africa and nine other African nations over the new variant, which the World Health Organization has said poses a “very high” risk.

It hasn’t banned entry from other countries including the U.S. and U.K. where omicron has been found, though most foreigners have already been essentially shut out after the government halted new entry by foreign businesspeople and students, adding to an existing ban on tourists. Japan’s own citizens may return from affected countries, provided they undergo a period of quarantine in a government-designated facility. Two cases of the variant have already been found in people returning to Japan from overseas.

The government had said the ban on flight reservations wouldn’t apply to existing bookings or flights transiting through Japan and that the suspension could be shortened or extended depending on how the omicron situation develops. The policy sparked “confusion” among some people, Kishida said earlier on Thursday.

Japan has the lowest rate of infections among Group of Seven advanced nations, with 117 new cases recorded Dec. 1, compared with daily figures over 25,000 in August. The daily number of deaths has been in single figures for about a month, and about 77% of the population has received two vaccine doses, while a rollout of booster shots began this week.

(Updates throughout with latest comments on travel.)