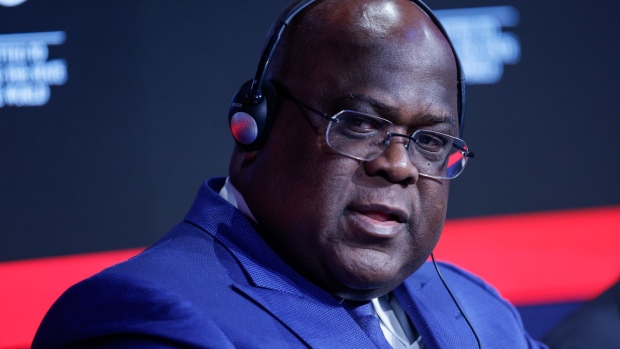 Congo, Africa’s second-largest nation by landmass, is flush with natural resources — including copper and cobalt that are major components in electric vehicles — but remains one of the world’s least-developed countries. Most of its minerals end up in China, which signed a landmark deal with Tshisekedi’s predecessor in 2008 to trade roads and buildings for the two metals.

“The Chinese, they’ve made a lot of money and made a lot of profit from this contract,” Tshisekedi said in an interview at the World Economic Forum in Davos, Switzerland. “Now our need is simply to re-balance things in a way that it becomes win-win.”

The contract renegotiation is part of a campaign by the president to ensure the country gets paid for the full value of its resources, which are increasingly in high demand.

The accord with China was signed at a time when Congo was emerging from decades of dictatorship and war and newly elected President Joseph Kabila was desperate for financing. It mandated that Chinese companies invest $3.2 billion in a copper-cobalt mine and another $3 billion in infrastructure funded by the mine’s revenue.

Congo’s government says China has released less than a third of the infrastructure funds.

“We’re happy to be friends with the Chinese, but the contract was badly drawn up, very badly,” Tshisekedi said. “Today, the Democratic Republic of Congo has derived no benefit from it. There’s nothing tangible, no positive impact, I’d say, for our population.”

Zhu Jing, China’s ambassador to Congo, said Chinese investment had led to jobs and Congo had almost $11 billion in trade with China during the first 11 months of 2022.

“Chinese investors, despite the very difficult business climate in the DRC, have created more than 100,000 local jobs in the country and helped many Congolese families out of poverty,” he said by text message. “If there is a problem in the distribution of the profit, it is rather internal Congolese problems.”

His government was constantly seeking to improve the partnership with Congo, Zhu said.

Discussions over how to improve the agreement have been going on for more than a year.

“You know, the Chinese are the champions of marathon discussions,” Tshisekedi said. “They’re known worldwide for it. We’re undergoing this experience now and so, we’ll see, but we remain optimistic.”

Negotiations are also dragging on over the Grand Inga site with Australia’s Fortescue Metals Group Ltd., which has a memorandum of understanding with Congo to develop what could be the world’s largest hydropower project, Tshisekedi said.

The president wants Fortescue to allow other investors into the deal, especially from Africa, and possibly scale down its ambitions in order to speed up development, he said.

“We’re not on the same wavelength,” he said, adding that he’d met at Davos with Andrew Forrest, Fortescue’s billionaire chairman.

“We want to make it a kind of opportunity to also unite other interests, particularly African interests,” Tshisekedi said. “We’re open to everything, to all discussions, to all meetings.”

Talks with Fortescue are continuing, Tshisekedi’s director of communications later confirmed. Fortescue Future Industries Ltd. plans to use Inga’s energy, which could eventually be twice as powerful as China’s Three Gorges project, to produce green hydrogen and green ammonia.

The company is in “active discussions” about the project, FFI Chief Executive Officer Mark Hutchinson said in an emailed response to a request for comment. Tshisekedi plans to visit Australia to continue those talks, he said.

“Fortescue has a team in the DRC and are continuing to work closely with the government to take this forward,” Hutchinson said. “Fortescue welcomes other partners to this important project.”

There’s no timetable for the next phase of Inga, the 10-gigawatt project known as Inga 3, Tshisekedi said.

The president, who’s also dealing with a multitude of violent conflicts at home and a reelection campaign at year’s end, has grown more outspoken against outsiders taking advantage of Congo’s resources for their own gain.

This has been particularly true in the country’s east, where an offensive by the M23 rebel group — allegedly backed by neighboring Rwanda — has displaced more than 450,000 people. Rwanda denies that it’s supporting the militants, who say they’re fighting for the rights of Congolese of Rwandan heritage.

Eastern Congo has been wracked by conflict since the 1990s, when violence from the aftermath of Rwanda’s civil war and genocide spread across the border. More than 100 armed groups remain active in the region, some of whom profit from the illegal trade in natural resources, which often transit through neighboring countries.

“Rwanda has been at the base of instability in Democratic Republic of Congo for twenty years,” Tshisekedi said. “It’s thanks to this instability that it can create mafia networks of illicit exploitation of gold, coltan and other minerals.”

“The root cause of instability in eastern Congo is the security and governance failures of the Congolese government and the longtime involvement in the mining sector of the Democratic Forces for the Liberation of Rwanda, the genocidal militia that fled Rwanda in 1994, as well as dozens of Congolese illegal armed groups that are supported by the Congolese military and government, and which exploit Congo’s natural resources with impunity,” spokeswoman Yolande Makolo said by text message.

A plan to impose a monopoly on the sale of all hand-dug cobalt is also part of Tshisekedi’s goal to ensure Congo is paid for its minerals, he said.

Congo’s state-owned Entreprise Generale du Cobalt, or EGC, still needs a full management team and a regulator, according to the president. Talks are ongoing with potential partners, including Trafigura Group, the Singapore-based commodities trader, he said.

Congo is responsible for about 70% of world cobalt production, as much as 30% of which comes from so-called artisanal miners.

Those miners often work in dangerous and unregulated conditions, and EGC “represents one of the brightest hopes for instigating the improvements needed,” Trafigura said in an emailed response to questions Thursday.

“Trafigura remains committed to its commercial agreement with EGC and delivering on the pressing need to kick-start the large-scale formalization” of the artisanal and small-scale mining cobalt industry, it said.