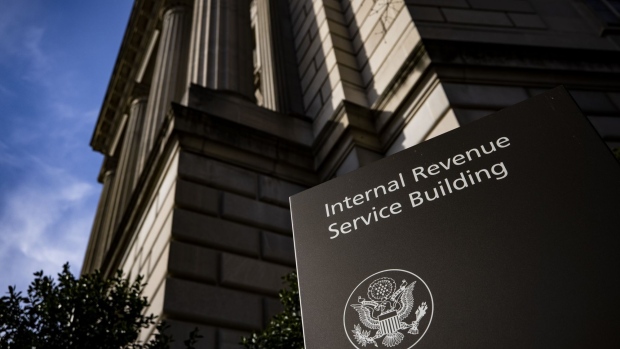 Signage outside the Internal Revenue Service (IRS) headquarters in Washington, D.C., U.S., on Friday, March 19, 2021. The IRS is delaying the April 15 tax-filing deadline to May 17, giving taxpayers an additional month to file returns and pay any outstanding levies. , Bloomberg

(Bloomberg) -- The Internal Revenue Service is under pressure from a large group of lawmakers to stop penalties and pause automated collections from taxpayers whose returns have been caught in processing backlog.

In a letter signed by at least 216 Republicans and Democrats from both the House and Senate, the legislators urged the IRS to streamline the processes for resolving penalty-abatement issues and amended tax returns. They also asked the IRS to stop automated collections until it could work through some of the backlog and give relief to taxpayers who had already paid at least 70% of their taxes.

The IRS had more than 10 million unprocessed tax forms as of December, according to the letter, led by Senators Robert Menendez, a New Jersey Democrat, and Bill Cassidy, a Louisiana Republican. The IRS has said it generally starts a tax season with fewer than 1 million unprocessed forms. Representative Linda Sanchez, a California Democrat, is leading the effort in the House.

The IRS has faced additional scrutiny from lawmakers in recent weeks as the agency has warned that taxpayers could face long delays in receiving their tax refunds this year. In addition, the Taxpayer Advocate Service, or TAS, which helps resolve taxpayer issues with the IRS, has had to reject many cases because of a record number of problems.

“This has made it impossible for frustrated taxpayers to find any help,” the lawmakers said in the letter to Treasury Secretary Janet Yellen and IRS Commissioner Chuck Rettig. “When our constituents cannot get assistance from the IRS and TAS, they contact us, and we have our hands tied at this point as well.”

The IRS began accepting tax returns on Monday for the 2022 tax season, which runs through April 18 for most taxpayers. The IRS recommends taxpayers double check their tax returns to make sure everything is accurate, file electronically and request to receive their refund via direct deposit for the best chance of avoiding delays.

(Updates with link to letter, number of signatories in the second graf. Sanchez in the third paragraph.)