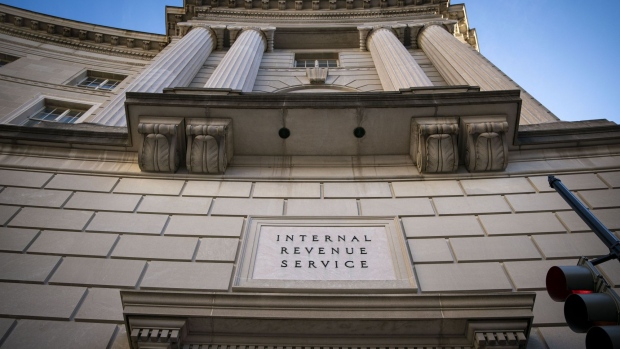 The Internal Revenue Service (IRS) headquarters in Washington, D.C., U.S., on Friday, Feb. 25, 2022. The IRS is expanding its capacity to process tax returns following criticisms from members of Congress about taxpayers waiting months to get their refunds. , Bloomberg

(Bloomberg) -- US lawmakers are pressing the IRS to explain how it plans to relieve a backlog of tax returns that have delayed refunds and to detail what measures it’s taking to improve customer service.

Dozens of congressional Republicans and Democrats made the demands in a letter to the Internal Revenue Service, obtained by Bloomberg News.

The IRS has said it plans to reduce by year-end the backlog of paper filings, which have been running at historically high levels since the pandemic hit. But the lawmakers, citing data from an IRS watchdog, said that the backlog has grown and that the agency has failed to meet targets to hire new employees.

“The IRS must take additional steps to improve customer service issues, decrease processing delays, and work down the backlog of paper returns and correspondence by continuing the maximum use of overtime and surge teams,” according to the letter, signed by 93 House and Senate lawmakers.

The group also called for “the continued suspension of automated notices and collections -- which have been critical in reducing pandemic-related tax return and correspondence backlogs.”

The lawmakers asked IRS Commissioner Chuck Rettig to answer questions this week about how the agency plans to resolve the backlog and bring on additional workers.

Refund delays, long wait times to reach customer service agents and other difficulties reached a high point during the pandemic, when processing centers were closed and the IRS took on additional tasks to distribute stimulus payments and other benefits.

More than two years later, the agency has yet to recover, despite Congress giving it some relief, including the ability to fast-track hirings.

The push to improve customer service at the agency comes as the IRS is on the cusp of getting an influx of new funding as part of the Inflation Reduction Act. The bill, which President Joe Biden is expected to sign into law this week, includes $80 billion in additional money for the agency over the next decade to rebuild enforcement capabilities, hire new employees and invest in new technology. IRS officials have said this will help revive an agency that has suffered from budget cuts for years.