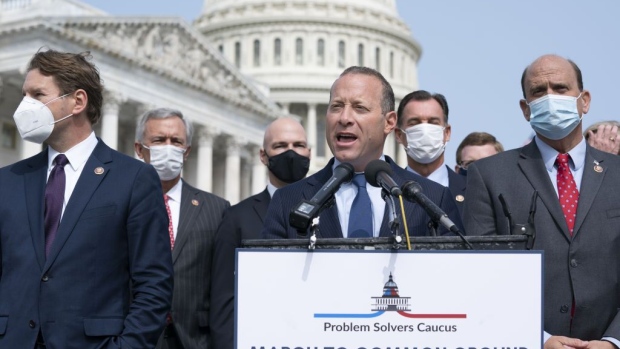 Representative Josh Gottheimer, a Democrat from New Jersey and co-chair of the House Problem Solvers Caucus, center, speaks during a news conference at the U.S. Capitol in Washington, D.C., U.S., on Tuesday, Sept. 15, 2020. The House Speaker today said Congress should stay in session until lawmakers and the White House get an agreement on another stimulus package, something that's looked increasingly distant amid partisan battling. , Photographer: Bloomberg/Bloomberg

(Bloomberg Opinion) -- In sharp contrast to its impressive performance with the CARES Act, which was passed in less than two weeks, Congress’s attempt at a second major pandemic relief bill has been a rolling disaster for nearly two months. To prevent a lasting recession from taking hold, Congress needs to find a compromise.

The bipartisan Problem Solvers Caucus in the House laid out just such a blueprint on Tuesday. It’s not perfect. It won’t satisfy Democratic demands for huge state and local aid, or placate the Republican desire to cut costs. It might, however, be enough to keep the economy growing through the end of the year and give the U.S. a shot at avoiding another decade of labor-market pain.

Still, passage is a long shot — if the bill ever made it out of the House, it’s almost certain the bill would die in the Senate. If Congress does nothing, how might the economy respond?

It’s worth noting that the situation now is much different than it was six months ago, when the economy began collapsing at a record pace. The original outbreak in the Northeast has been largely contained, and the secondary wave that passed through much of the rest of the nation was weaker than feared. More decisively, over the last few months the U.S. economy has been bouncing back across a variety of measures.

Two of the three most volatile sectors of the economy, business investment and housing starts, have largely recovered. The third — consumer durable purchases, such as appliances and automobiles — has surged past pre-pandemic levels. Unemployment, meanwhile, has fallen from a postwar record of nearly 15% in April to just more than 8% in August.

Nonetheless, the recovery is still fragile and the potential for additional surges remains. Most of the improvement in the unemployment rate was furloughed workers returning to work. The so-called full-recall employment rate — the percentage of workers whose job loss is permanent — has fallen only slightly, from 7.6% in April to 6.6% in August. Even worse, much of that dip may be illusory, as the Bureau of Labor Statistics expanded its definition of “temporary” in July.

This underlying weakness hasn’t shown up in the spending numbers precisely because the CARES Act was so powerful. The large unemployment insurance supplement in the package meant that millions of furloughed workers actually saw their incomes rise. Not only were they slated to get their jobs back, but while they were waiting to be recalled, they took home more money.

But disposable personal income, which hit a record in April, has been in decline. It will continue to fall as more employees come back to work and their earnings are not supplemented by the government.

At that point, the weakness in the labor market is likely to translate into a renewed decline in spending. That decline in spending will, in turn, weaken companies’ demand for workers. As a result, the current slow decline in the full-recall unemployment rate will stall out and possibly reverse.

The job market risks repeating a slightly worse version of the dot-com crash of the early aughts, when unemployment continued to drift upward for nearly two years after the recession ended in November 2001. It hit a peak of 6.3% in June 2003.

This time around, there is unlikely to be a subprime-financed housing boom to snap the economy out of its malaise. It could be 2025 before the underlying weakness in the job market is addressed, and 2030 before the economy returns to anything close to full employment.

This slow-moving crisis isn’t as emotionally salient as the one the U.S. economy faced in March, but it is no less real. To avoid it, Congress will have to work together again — and soon.