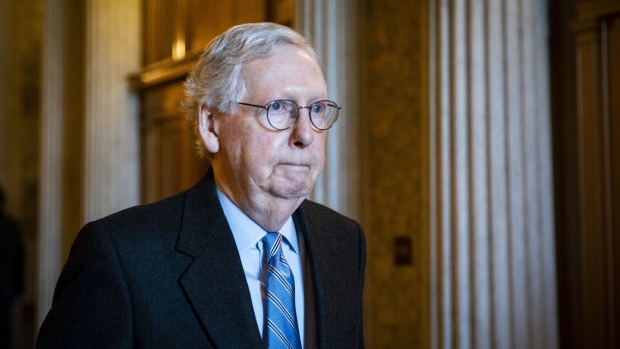 (Bloomberg) -- The federal government moved another day closer to a brief weekend shutdown with congressional Democrats and Republicans still struggling for agreement to pass a stopgap funding bill before Friday’s deadline.

Senate leaders in both parties also haven’t fully turned back a threat by a group of conservative Republicans to tie up the vote on a temporary government funding measure over their objections to federal Covid-19 vaccine and testing mandates.

Senate Majority Leader Chuck Schumer and his Republican counterpart, Mitch McConnell, gave repeated assurances throughout the day on Wednesday that negotiations were making progress and a deal was near.

“I think we’re going to be OK,” McConnell told reporters.

But as the House and Senate adjourned for the night there was no agreement.

One of the main hangups between the two chambers and between Republicans and Democrats was how long the stopgap funding authority would last. Democrats were pushing for late January while Republicans backed a longer temporary measure to give more time for negotiations on the 12 annual appropriations bill for the fiscal year that began Oct. 1. Also under negotiation was extra funding to process visas for refugees from the U.S. war in Afghanistan.

Another hurdle is the demand by a group of Republicans in the Senate that the stopgap block funding for President Joe Biden’s initiative requiring large private employers to either mandate vaccinations against Covid-19 or provide weekly testing. Some Republicans suggested the standoff could be resolved by allowing a simple-majority vote on an amendment to the stopgap bill that would remove funding to implement the vaccine mandate.

“I think that would be a very good resolution,” Texas Republican Senator Ted Cruz, who had said he would oppose the stopgap without addressing the vaccine mandate, said.

Democratic leaders had not yet weighed in, but a similar amendment failed on a party-line vote during debate on the last short-term spending bill, which expires Friday, and likely would again.

Congress also needs to agree to waive the law known as Paygo enacted in 2010, or else Medicare and assorted other programs including some farm subsidies prized by Republicans will get automatically cut next year. Congress has routinely waived the law in the decade since it passed, but that requires 60 votes in the Senate, and therefore bipartisan cooperation.

Time is running short. If the House votes Thursday on the temporary spending bill, the Senate would need the cooperation of all 100 senators to move quickly toward a vote. But if only one senator objects, the Senate would have to stage a series of procedural votes, with lengthy minimum time requirements in between, before even voting on the legislation’s passage. That process could take about five days.

A shutdown over the weekend would have limited effects on the public, given that most federal offices operate on a Monday to Friday schedule. Most of the 2.9 million federal civilian employees would not face unpaid furloughs until Monday.

“When a CR reaches the Senate, Democrats are going to support it and work to pass it as quickly as possible,” Schumer said. “Our Republican colleagues, meanwhile, can either work with us to move the process quickly through the chamber or they can engage in obstructive tactics that will make a government shutdown almost a certainty.”

Numerous Republican lawmakers said they also wanted to avoid a shutdown, warning their party would take the blame.

“We should never be shutting the government down,” GOP Senator Mike Braun of Indiana said on Bloomberg TV’s “Balance of Power with David Westin.” “Whenever that happens, the Republicans are left holding the bag or get the blame for it.”