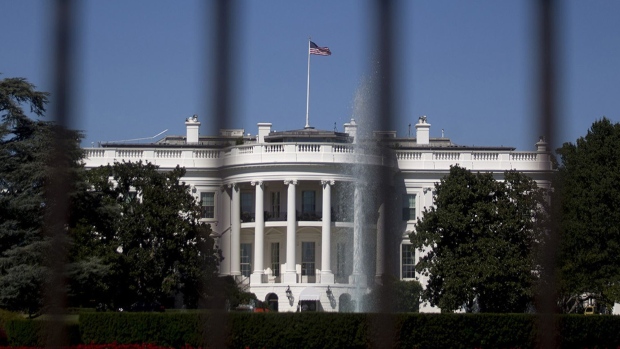 The south side of the White House stands past a fence in Washington, D.C. , Photographer: Andrew Harrer/Bloomberg

​House Democrats scored a significant and potentially far-reaching appeals court victory over the Trump administration and its expansive view of presidential power in a fight over testimony of former White House counsel Donald McGahn.

The U.S. Court of Appeals in Washington on Friday affirmed that Congress can sue to enforce subpoenas of senior White House officials, including McGahn, a witness to several instances of potential presidential obstruction of justice investigated by Special Counsel Robert Mueller. The court rejected the administration’s arguments that Congress lacked legal standing to sue and that the judiciary had no authority to resolve a dispute between the legislative and executive branches.

“The Constitution charges Congress with certain responsibilities, including to legislate, to conduct oversight of the federal government, and, when necessary, to impeach and remove a President or other Executive Branch official from office,” the court said. “Possession of relevant information is an essential precondition to the effective discharge of all of those duties.”

Friday’s ruling was a so-called “en banc” decision by nine judges who agreed to reconsider an earlier finding in Trump’s favor by a three-judge panel of the same court. Such rehearings usually signal that judges are skeptical of an earlier finding, so the result was not a complete surprise.

The 7-2 ruling is nonetheless another blow to the Trump administration’s assertion of far-reaching protections against external oversight. The U.S. Supreme Court ruled last month that the president is not immune to subpoenas related to state criminal investigations. The White House is expected to appeal Friday’s decision to the high court as well, likely dragging the fight on past the November election.

The White House didn’t immediately respond to a message seeking comment on the McGahn ruling.

“Today’s decision strikes a blow against the wall of impunity that President Trump has tried to build for himself,” House Judiciary Committee Chairman Jerrold Nadler, the New York Democrat whose committee issued the subpoena at issue, said in a statement. “No one -- not even the President -- is above the law.”

The appeals court revived a lawsuit that was triggered last year when the president said his aides were “absolutely immune” from congressional subpoenas, hobbling the House’s efforts to get testimony during the Russia probe. The judiciary committee then sued to compel testimony by McGahn.

Friday’s ruling is expected to have an impact on a number of other cases. The judge overseeing House Democrats’ lawsuit to obtain Trump’s tax returns from the Treasury Department put the case on hold awaiting a decision in the McGahn case. The appeals court on Friday sent back to a lower court a lawsuit by House Democrats seeking to block Trump from spending US$6.1 billion on the border wall, a case that also hinged on whether Congress has standing to sue the executive branch.

The administration had argued that the House has other tools at its disposal to deal with disputes over appropriations or subpoenas, including holding witnesses in contempt, refusing to cooperate with a president’s legislative agenda, shutting down the government and even starting impeachment proceedings. It said allowing such Congressional lawsuits would improperly politicize the judiciary branch and invite a flood of future litigation.

In a dissent in the McGahn ruling, U.S. Circuit Judge Thomas Griffith echoed those arguments, saying the majority ruling was politicizing the court and triggering waves of “futile” lawsuits.

“If we venture into this increasingly politicized territory, we risk undermining that neutrality and losing the public’s trust,” he wrote. “We do neither ourselves nor the parties any favors by embarking down this path, and I would leave the political branches to resolve their disputes through the political process -- as the Constitution demands.”

“If we don’t enforce the subpoenas, the President could just do whatever he wants,” she said. “The idea that the court should get out really means in practice that the president can do what he wants.”

Democrats pointed out most presidents starting with George Washington complied with congressional demands for information. That only changed, the House said, with the Watergate scandal, when the Senate had to sue for evidence it sought from President Richard Nixon. The Supreme Court in 1974 required Nixon to turn over the secret Oval Office tapes that would lead to his resignation.

The makeup of the en banc panel also did not augur well for the president, since most of the judges were Democratic appointees. Trump’s two appointees to the court both recused themselves without explanation. Another en banc panel on May 14 dealt the president a blow by reviving a lawsuit against him over alleged violations of the Constitution’s so-called emoluments clauses.

The clash over McGahn’s testimony also featured in Trump’s impeachment, with Democrats saying they should have been permitted to hear from him. In arguments before the appeals court, Democrats challenged the argument that Congress could resort to impeachment to seek information from the White House, pointing out that the president repeatedly refused to comply with subpoenas during the impeachment fight on the grounds that the House had not sued to enforce them.

Congress “cannot undertake impeachment proceedings without knowing how the official in question has discharged his or her constitutional responsibilities,” the appeals court said Friday.

“Indeed, the ordinary and effective functioning of the Legislative Branch critically depends on the legislative prerogative to obtain information, and constitutional structure and historical practice support judicial enforcement of congressional subpoenas when necessary,” the majority said.

The en banc panel sent parts of the case back to the three-judge panel for further consideration. Josh Chafetz, a professor at Cornell Law School, said the prolonged process makes the impact of Friday’s ruling “fairly muted.” He compared it to the Supreme Court ruling on Trump’s tax records, which was also sent back to a lower court for further proceedings that are unlikely to conclude in the next three months.

“McGahn is not going to testify in this Congress or before the election,” Chafetz said.