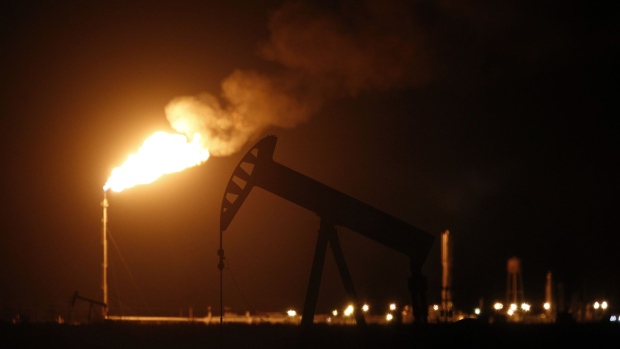 The silhouette of an electric oil pump jack is seen near a flare at night in the oil fields surrounding Midland, Texas, U.S., on Tuesday, Nov. 7, 2017. Nationwide gross oil refinery inputs will rise above 17 million barrels a day before the year ends, according to Energy Aspects, even amid a busy maintenance season and interruptions at plants in the U.S. Gulf of Mexico that were clobbered by Hurricane Harvey in the third quarter. , Bloomberg

A cache of emails, lobbying and preparation materials for senior executives obtained by the Committee on Oversight and Reform show that Big Oil climate pledges rely on “unproven technology, accounting gimmicks and misleading language to hide the reality,” Subcommittee Chair Ro Khanna said in an emailed statement.

Shell touted an ambitious path to achieve net-zero emissions but internally emphasized that this had “nothing to do with our business plans,” emails showed. Exxon sought to water down statements from the industry’s Oil and Gas Climate Initiative to remove a pledge to uphold the Paris Agreement.

The committee released the emails after a year-long investigation into whether Big Oil misled the public on climate change, a claim the industry denies. A hearing on the issue was set for Thursday.

“As we face more deadly, extreme weather around the globe, fossil fuel companies are reaping record profits and ramping up their misleading PR tactics to distract from their central role in fueling the climate crisis,” Representative Carolyn Maloney, the chairwoman of the Committee on Oversight and Reform, said in a statement.

Shell has been producing climate pathways for decades “and it’s widely understood they are not prescriptions, predictions or meant to represent Shell’s current business plan,” the company said in a statement.

Exxon “has supported the Paris Agreement from its inception in 2015 and continues to support US government participation in the framework,” it said in a statement. BP said it has set near-term targets consistent with its ambition to become a net-zero company by 2050.

(Updates with company comments at end)