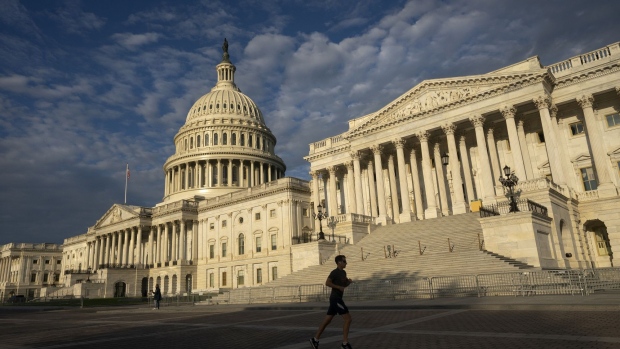 A person runs past the U.S. Capitol building in Washington, D.C., U.S., on Friday, Aug. 7, 2020. Negotiations on a new coronavirus relief bill edged toward the brink of collapse after a meeting Thursday between White House officials and top congressional Democrats ended with each side accusing the other of being unwilling to compromise and the biggest issues far from resolved. Photographer: Stefani Reynolds/Bloomberg , Bloomberg

The U.S. should re-examine all aspects of its relationship with China, including investment, trade, defense and intelligence capabilities, according to two separate reports issued Wednesday by congressional panels -- one controlled by Democrats, the other by Republicans.

Congressional GOP members urged key industries to shift supply chains away from China and called for stricter limits on some China-related investments, according to the final report from their China Task Force. The group, which Democrats declined to join, called China a “generational threat” akin to the Soviet Union during the Cold War.

That panel also criticized the Chinese Communist Party for human rights violations and an early coronavirus response that relied on “coverups, arrests and blame-shifting, rather than transparency.”

“For decades, the United States and its allies have been asleep at the wheel,” said the tax force’s chairman, Michael McCaul, a Texas Republican. “COVID created an awakening experience for the American people and the sleeping giant has finally awoken.”

At the same time, a separate report released by the House Intelligence Committee found significant deficiencies in the U.S.’s intelligence capabilities when it comes to China and recommended overhauling the intelligence approach to the country. The panel is led by California Democrat Adam Schiff and includes members of both parties.

“The widespread, if not yet fully understood, global impact of COVID-19 and other transnational events make this both an opportune and urgent moment to assess our intelligence posture towards China,” the report said. “Today’s globalized world necessitates thoughtful, detailed, and expansive analysis of how events within China -- and how China’s leadership decides to react to those events -- have the potential to meaningfully alter the world’s course.”

The GOP group’s findings, that the last 40 years of diplomatic engagement with China have been a failure, comes as Congress increasingly supports a tougher stance on Beijing. But the focus on China’s role in the spread of the coronavirus is viewed warily by Democrats, who don’t want to absolve President Donald Trump of any culpability for the pandemic’s impact on the U.S. before the Nov. 3 election.

Most of the 400 policy recommendations from the China Task Force are bipartisan, according to an aide who worked with the group. Some proposals, particularly those related to protecting intellectual property and shifting U.S. supply chains away from China, have broad agreement in Congress.

Rebuking China has been a rare source of bipartisanship in the Trump era, including when the Trump administration was trying to finalize a trade deal with the communist nation. Congress this year angered Beijing by passing legislation to impose sanctions on Chinese officials found to be undermining Hong Kong’s autonomy and oppressing Muslims in China’s Xinjiang province.

Lawmakers have shown some hesitation regarding the imposition of tight controls on the flow of capital between the two nations. But the House GOP report does recommend some restrictions on investment in Chinese firms, including for certain retirement accounts.

The task force also calls on the House to approve a Senate-passed bill to de-list Chinese companies on U.S. exchanges if they fail to comply with U.S. accounting standards. A companion measure has been introduced in the House, but has yet to be taken up by the Financial Services Committee.

The report’s criticism of China’s coronavirus response echoes some of Trump’s complaints, which Democrats warned were intended to distract from his administration’s missteps in managing the pandemic.

The U.S. leads the world in coronavirus cases and deaths, despite having the biggest economy and one of the most advanced medical systems. As of Tuesday, the U.S. had recorded more than 7 million cases and 205,000 deaths out of a global total of more than 33 million cases and one million deaths, according to Johns Hopkins University.