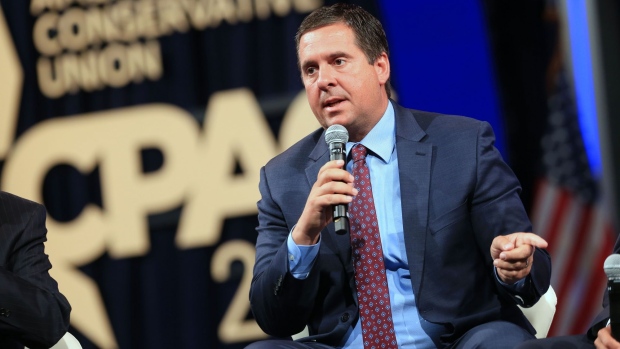 Nunes, who is the ranking member of the House Intelligence Committee, says Maddow has repeatedly targeted him with defamatory statements that accuse him of obstruction of justice and treason. Nunes said Maddow has also called for him to lose his committee post and be stripped of his security clearances.

Nunes has been busy in the last few years suing media and critics he thinks unfairly throw shade at him. In addition to suits against CNN, the Washington Post, Esquire and McClatchy -- which owns the largest newspaper in his home district -- Nunes sued Twitter over two anonymous accounts that mock him under the handles: “Devin Nunes’ Cow” and “Devin Nunes’ Mom.”

Nunes specifically complained about statements Maddow made during her March 18 cable-TV show -- and repeated on YouTube, Twitter and her blog -- that he refused to give the FBI a package he’d received from a suspected Russian agent, according to the complaint filed by the congressman Tuesday in federal court in Sherman, Texas.

Instead, Nunes claims, MSNBC and Maddow knew prior to that broadcast that Nunes had told other reporters he voluntarily gave the FBI a package the suspected agent sent to him through the congressional committee. He said the fact Maddow didn’t ask him for comment before publishing the false statements is proof of actual malice.

“MSNBC and Maddow harbor an institutional hostility, hatred, extreme bias, spite and ill-will towards plaintiff due to plaintiff’s emergence as the most prominent skeptic in Congress of Maddow’s marquee news narrative from 2017 to 2019: that the Trump campaign colluded with Russians to hack the 2016 presidential elections,” Nunes’ lawyers said in the complaint.

Nunes is asking for a jury to determine unspecified damages for “insult, pain, embarrassment, humiliation, mental suffering and injury to his reputation.”