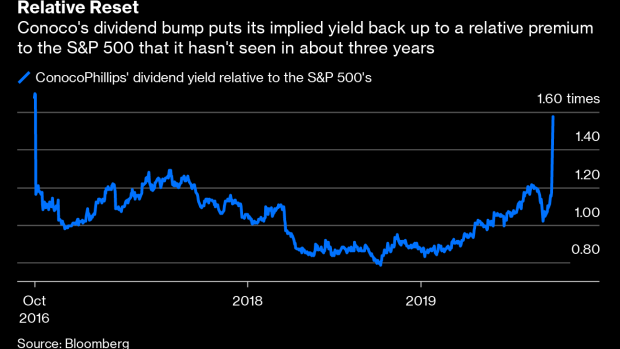 (Bloomberg Opinion) -- Discretion won't get you anywhere with oil investors these days. They want pledges, not plans.

ConocoPhillips is bumping up its dividend by 38%. The company also issued guidance for buybacks next year of $3 billion, down from this year’s expected $3.5 billion. The dividend increase is roughly the size of that $500 million difference. It seems to be worth more, though: Conoco was one of only a few large-cap oil stocks to close up on Monday, adding about $1.7 billion of market cap relative to the sector.(1)

Dividends, like stock buybacks, are technically discretionary, but boards are loath to cut them except in dire circumstances. Conoco has a history here, having come unstuck in early 2016 when oil prices troughed. Even after the latest raise, the new dividend is still 43% lower than back then. Buybacks have helped make up that gap in cash terms, albeit with something of an out if things turned sour again. So Conoco effectively taking $500 million from the prospective buyback column and putting it in the dividend pledge signals confidence in its ability to weather any storm – which isn’t nothing, given how ugly 2020 might be.

Similarly, a certain ginormous national oil company with its eye on an IPO has gone all out to convince investors that future  dividends are as good as in their pockets. Saudi Arabian Oil Co. issued guidance last week of a “base dividend” of $75 billion in 2020, albeit “at the board's discretion.” As I wrote here, even Saudi Aramco’s prodigious profits may not necessarily cover that if Brent crude averages $60 rather than $70.

As it turns out, Aramco’s website now hosts an updated presentation with a whole new slide on its “dividend prioritisation mechanism,” which is a fancy way of saying it will guarantee a minimum payment to minority shareholders for five years; like a temporary preferred stock. They would get a minimum of their pro-rata share of a $75 billion dividend regardless of whether Aramco actually paid that in total, while the government would just get their portion of whatever actual amount was declared. In other words, if investors end up buying 5% in an IPO, they would get a collective payout of at least $3.75 billion a year through 2024, come what may.

The cost to the government in terms of potentially foregone payments looks negligible. Even if Aramco’s crude oil output averaged just 9.5 million barrels a day and Brent averaged just $55 a barrel, Riyadh would forego an aggregate $5 billion in payments spread across five years (using my numbers and assuming a 5% free float).

Even so, the sudden switch from the “board’s discretion” to we’ll-pay-come-what-may is striking. It fits with the recently announced change in Aramco’s royalty rates, which effectively negate any gains for investors if oil spikes above $100 but boost the capacity to pay dividends at today’s levels. Aramco’s owner wants this IPO done at a high valuation and appears to recognize nobody’s buying oil companies today because of what oil might do in the future; rather, they’ll consider it if there’s a steady check guaranteed upfront.

While oil companies compete in terms of free cash flow yields, they’re all fighting for attention in a stock market that has become largely indifferent to the sector. Conoco has actually been an exemplar of prioritizing payouts and cutting costs since 2016, yet its stock has languished so far this year. The dividend bump, coming a month before a strategy update, feels like an attempt to reset things, taking Conoco’s yield above 3% to a wider relative yield premium – or valuation discount – versus the market.

French oil major Total SA also announced a dividend hike a couple of weeks ago, essentially promising to pay out every cent of an anticipated $5 billion increase in projected cash flows through 2025. Exxon Mobil Corp., meanwhile, continues its long track record of raising its dividend but finds its stock now yields north of 5% anyway, close to its highest levels ever since the merger with Mobil. That may reflect the long absence of buybacks, which, for this company, were once regarded as a given. However, it may have more to do with the fact that Exxon is effectively borrowing to pay its current dividend.

Buybacks remain useful window displays for company management; certainly, Chevron Corp.’s resumption of them has helped put Exxon in the shade. Yet, as Dan Pickering, chief investment officer at Pickering Energy Partners, puts it: “A dividend is a promise and share repurchase is a goal.” Dividends offer a surer constraint on capex budgets and more of an obligation to pay out cash sooner rather than later in a sector grappling with intimations of mortality. Investor decks emphasize resilience against adversity rather than dangling the prospect of a windfall. Even Aramco has had to take the extraordinary step of guaranteeing a payout, which doesn’t exactly scream bullishness on oil.

Markets are often said to be driven by just two emotions: fear and greed. The majors’ shifting payout priorities appear to be a perfect synthesis of the two.