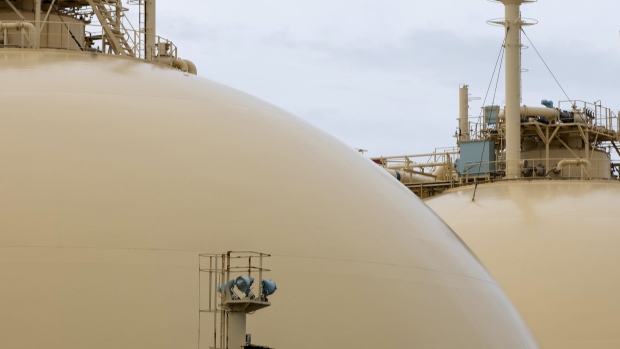 Gas storage tanks sit on-board the Gallina liquefied natural gas (LNG) tanker after docking at the National Grid Plc's Grain LNG plant on the Isle of Grain in Rochester, U.K., on Saturday, March 4, 2017. The shipment to England on the Gallina was priced using the U.K.'s National Balancing Point, where front-month gas cost about $7 a million British thermal units on Feb. 7. , Bloomberg

(Bloomberg) -- ConocoPhillips intends to become the largest shareholder in Australia Pacific LNG as it raises its stake in the development as part of a reshuffle of its Asian assets.

The Houston-based company will exercise preemption rights to buy an additional 10% stake in Australia Pacific LNG for as much as $1.6 billion, bringing its share to 47.5%, according to a statement Tuesday. Sydney-based Origin Energy had agreed to sell the stake to energy investor EIG Partners. China’s Sinopec is also a partner, owning 25%.

At the same time, ConocoPhillips agreed to sell its Indonesia oil assets for $1.36 billion, MedcoEnergi, along with a 35% stake in Transasia Pipeline Company. The assets produced about 50,000 barrels of oil-equivalent per day during the third quarter of 2021.

The moves come after the U.S. oil major posted its highest quarterly profit in a decade and completed two major acquisitions that made ConocoPhillips the second-largest shale oil producer in the Permian Basin. The Australian liquefied natural gas assets, which sells cargoes to Asia, provides access to rapidly-growing markets and their low-field declines complements shale production, which suffered fast-dropping oil flows after the first year.

“The Asia Pacific region plays an important role in our diversification advantage as an independent E&P and these two transactions enhance that advantage by lowering our aggregate decline rate and diversifying our product mix,” Chief Executive Ryan Lance said in the statement.

The company’s 2020 production from Australia LNG project was approximately 115 million barrels of oil-equivalent, with full-year 2021 distributions expected to be approximately $750 million, according to the statement. The project supplies LNG to long-term buyers in both China and Japan and is the largest supplier of natural gas to Australia’s East coast market, the statement said.

Flush with cash, the company announced this week that it would offer a $1 billion variable cash payout to its shareholders in addition to its regular dividend and share buyback program.

(Updates with context in the second paragraph.)