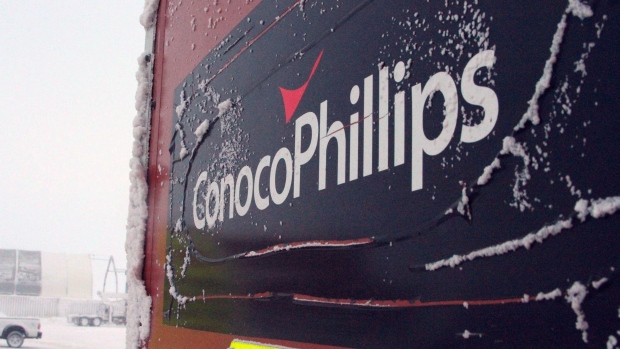 CALGARY -- Oil and gas producer ConocoPhillips Canada is being fined $180,000 for a 2016 pipeline leak that spilled a light petroleum liquid into a remote area of northwestern Alberta.

The leak of 380,000 litres of condensate resulted in 38 observed fatalities to unspecified species of wildlife and hundreds of potential wildlife deaths as it affected nearly three square kilometres of land as well as nearby waterways, the Alberta Energy Regulator said on its website.

The AER assessed a $165,000 fine against the Canadian arm of Houston-based ConocoPhillips Co. to account for the 33 days in May and June 2016 that the company failed to report the release to the regulator as it should have.

It also fined the company $5,000 each for three counts related to failing to develop and maintain a leak-detection manual for the pipeline, failing to take reasonable measures to remedy and confine the leak and for allowing the release to damage public land.

Not noticing the leak when it began and then not reporting it immediately made worse environmental damage that included the loss of all fish spawning output in Webb Creek for the year, said AER director Mark Miller in his decision posted on the website.

"The failure to report and take remedial actions as soon as ConocoPhillips ought to have known very likely resulted in a greater degree of adverse effects to the environment that could have been mitigated if dealt with sooner," said Miller.

The company has received the AER's notice and is reviewing it, said spokeswoman Katherine Springall.

She said clean-up activities at the spill site began when it was discovered in 2016 and the company has since worked closely with the AER to mitigate environmental impacts.

The asset was included as part of a package sale to Cenovus Energy Inc. in 2017, she added, with responsibility for any remaining remediation transferred along with ownership.

Staff noticed lower pressure in the pipeline but couldn't see a leak right of way because the condensate had travelled underground to a less visible area, Miller said in his decision.

They concluded wrongly that the lower pressure resulted from overnight ambient temperature changes and minor leaks from inlet and outlet valves on the pipeline, he noted.