We're in the early innings of a strong oil cycle: RBC's Michael Tran

One hour after U.S. government data showed on Wednesday that American inflation had soared to a 31-year high, President Joe Biden vowed to fight the surge as “a top priority.”

Key to his administration’s response, Biden said in a statement, would be addressing the rising cost of energy -- what he described as “the largest share of the increase in prices.” He promised his National Economic Council would explore how to reduce prices.

The reality is that a small group of top Biden aides has already been meeting for several weeks, trying to come up with the best way to bring down the cost of gasoline. But even after extensive discussions, they’ve yet to reach consensus, according to people familiar with the matter. Some key officials at the Energy Department are inclined to take a wait-and-see approach. But White House aides are pushing to tap the nation’s emergency oil reserves, or to take the even more radical step of halting oil exports, the people said.

The indecision had dragged out any real action from the administration as gasoline prices have soared to seven-year highs. It also underscores how the pressure to tamp down inflation has pitted the Biden administration’s own policies on energy, free trade and climate change against each other. The final decision, which may not come until early next week once international climate talks in Glasgow are over, is likely to have a profound impact on the oil market, and spill over American foreign policy. 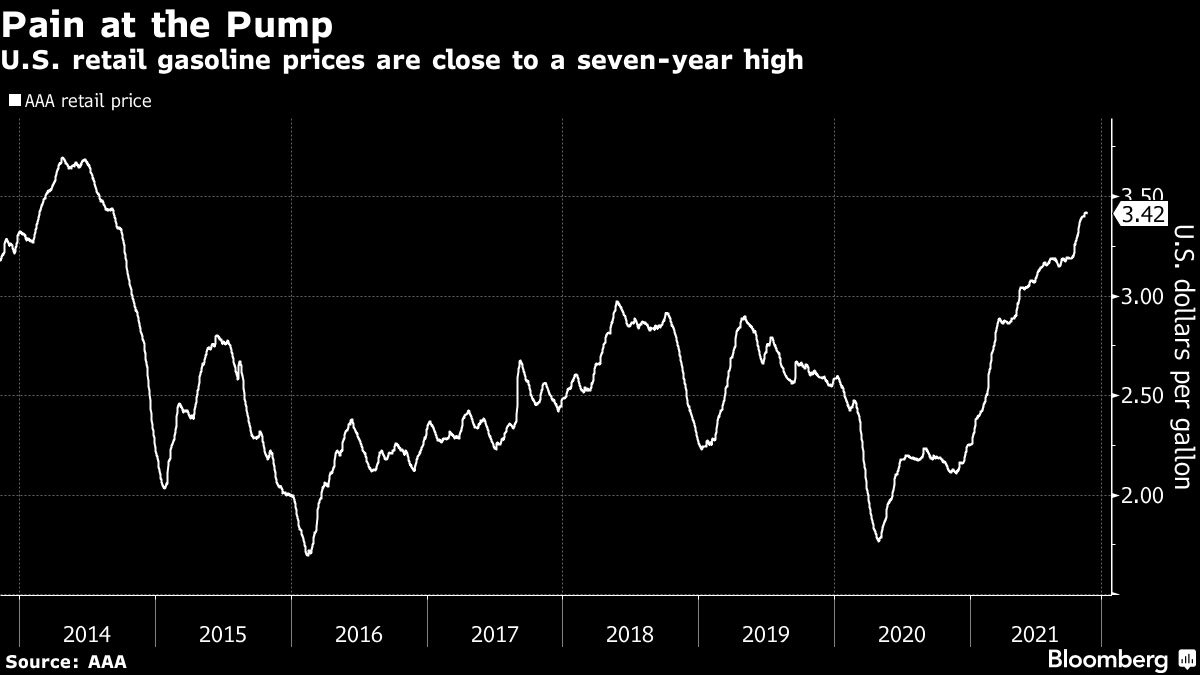 A White House representative pushed back on the notion of a divide in the administration and said it’s committed to taking action, if needed.

The group has met regularly in recent days, people familiar with the matter said, asking not to be identified because the talks are private. Deese and others are worried about the economic and political impact of high inflation and want to attack the problem now with forceful measures, the people said.

But Turk has argued against a stockpile release, citing U.S. forecasts showing the oil market may tip into a surplus in early 2022, which would then open the door to lower prices. And the State Department is opposed to banning exports because it says that could hurt countries it’s trying to re-engage with after the trade disputes of the Trump administration. The Treasury Department is also involved in the discussions.

An initial effort to reduce oil prices failed. Rather than act unilaterally, the White House tried to convince Saudi Arabia, Russia and other influential members of OPEC+ to pump more oil. When OPEC+ refused to change course this month, the debate shifted to what the U.S. itself could do.

Administration officials hope to design a “mechanism” in the next few days that Biden can use to bring oil prices down, according to people familiar with the talks. They cautioned that the president has yet to make a final decision and could still decide against any intervention. But if he does act, the mechanism is likely to include the simultaneous use of several tools and allow a response that would be calibrated according to the reaction of the oil market.

Chief among those tools is tapping the country’s Strategic Petroleum Reserve, or SPR, an underground store of more than 600 million barrels of oil. Furthermore, White House officials are exploring ways to make sure U.S. refiners process more crude into gasoline, possibly by relaxing mandates to mix gasoline with biofuels, the people said.

Limiting the use of biofuels such as ethanol derived from corn risks the ire of the farming lobby. But it could have an immediate impact at gas stations.

Oil traders believe Washington needs to release at least 30 million barrels from the SPR -- equal to about a month’s worth of American oil imports from OPEC nations -- to make a difference.

“The U.S. could arrange a total effective SPR release of 45-60 million barrels by bringing forward next year’s 20 million barrels of mandated SPR sales, coupled with additional barrels on an exchange basis,” said Ed Morse, an oil analyst at Citigroup Inc. and a U.S. energy official during the 1970s oil crisis.

Administration officials are also considering restrictions on the export of either crude oil or gasoline, an extreme option pushed earlier this week in a letter signed by 11 Democratic senators including Elizabeth Warren and Ed Markey.

It was only six years ago that Congress lifted a four-decade ban on oil exports, in the process reshaping global crude flows and shifting geopolitical power. Although the U.S. still buys millions of barrels of crude from foreign producers every day to supply the requirements of some domestic refiners, it also exports a significant amount.

In recent months, it shipped almost 3 million barrels a day, more than the total production of OPEC member Kuwait. Restricting that flow now would cause chaos in global energy markets.

The apparent contradictions of advocating for more oil supplies while seeking progress at the COP 26 climate conference aren’t lost on anyone, as Biden acknowledged during his appearance in Glasgow last week. The president told reporters that the transition way from fossil fuels won’t be quick or easy, and that current gasoline prices has a “profound” effect on working-class families.