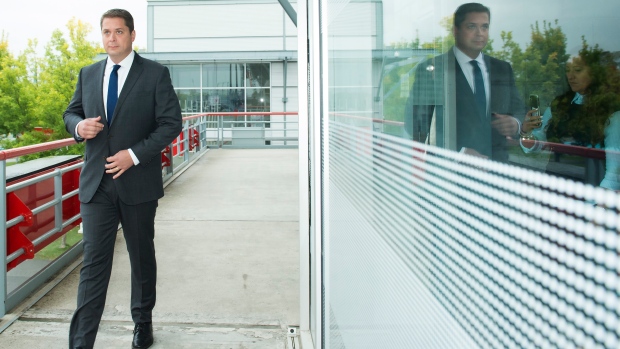 OTTAWA -- Conservative MPs have voted against giving themselves the power to kick Andrew Scheer out as leader of the party, The Canadian Press has learned.

That means the question of Scheer's leadership will now be in the hands of the party's grassroots members, who will gather for their biannual convention in April in Toronto.

Scheer, meanwhile, plans to embark on a cross-Canada "listening tour," while former Conservative cabinet minister John Baird has been tapped to lead an external review of what went wrong and what went right during the latest election campaign, said one MP who spoke on condition of anonymity.

The party's 121 members of Parliament were meeting today in Ottawa for their first formal caucus meeting since the Oct. 21 vote.

Among their first orders of business was to decide whether to adopt a rule that would allow 20 per cent of their group to trigger a leadership review.

Many MPs said they wanted the question of Scheer's future to be decided by the entire party.

But others had suggested that while they supported Scheer, they'd vote in favour of the rules on the principle that MPs ought to have the power to oust a leader.

Scheer spoke to the gathering before caucus members voted on whether to adopt a number of measures designed to give them more power. Reporters gathered outside the room late Wednesday in anticipation of the leader's news conference.

"I do not support caucus overruling the members on those kinds of issues," Garnett Genuis, who represents an Alberta riding, said before the meeting began."There will be a leadership review at the next convention that will respect members of the party that aren't in the caucus."

On Oct. 21, the Conservatives earned the largest number of votes since their inception in 2004, and successfully elected 26 more MPs than they had in 2015. But while they won slightly more of the popular vote than the Liberals, due to overwhelming majorities in Alberta and Saskatchewan, they lost ground in Quebec and Ontario and emerged with fewer seats: 121 to the Liberals' 157.

They also lost some high-profile MPs, including deputy leader Lisa Raitt, whose Ontario riding fell to the Liberals. She attended the meeting Wednesday, calling it a jumping off point to examine why she and others couldn't get elected, and not the time or place to make rash decisions about the future of the party.

Raitt, and others, expressed confidence in Scheer but among some senators from Quebec -- who held their own meeting Tuesday night -- the feeling was not entirely mutual.

Sen. Jean-Guy Dagenais said the first French debate was "catastrophic" for the Conservatives in Quebec, and that the party can't win in his province as long as Scheer remains the leader.

Sen. Claude Carignan said the election was over for the party in Quebec several weeks before the first debate, when Scheer fumbled repeated questions about whether the abortion issue could be reopened under a Conservative government.

Scheer eventually said his government would oppose efforts to legislate restrictions on women's access to the procedure but never clarified whether he would allow individual backbenchers to propose private member's bills on the issue.

"All the hesitation that he had in the debate and in the electoral campaign, particularly at the beginning of the campaign, created doubt in the heads of people," Carignan said. "In Quebec, we lost this campaign the first week."

Carignan didn't rule out Scheer remaining as leader, but he said without changes to his team, his approach to abortion and his message in the pivotal battlegrounds of Quebec and Ontario, it will remain difficult for the party to win under Scheer's continued leadership.

Calgary MP Michelle Rempel said Wednesday the party needs to address issues of relevance to the LGBTQ community such as the ongoing ban on blood donations from gay or bisexual men, and conversion therapy, and go beyond the issue of who does or doesn't march in gay pride parades. Scheer does not.

"I support marriage equality, I support the rights of the community, they are my rights, we need to be actively championing them," she said.

"I don't want this discussion to be around symbolism."