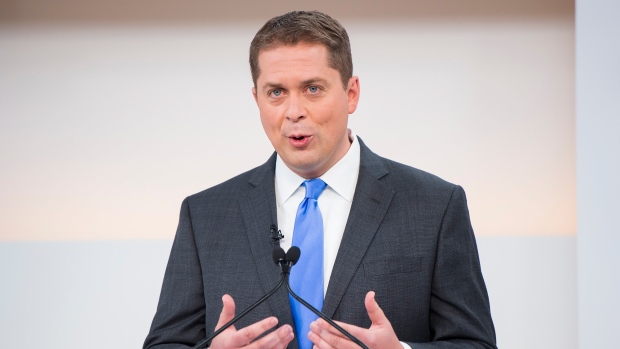 JONQUIERE, Que. -- Conservative Leader Andrew Scheer used a campaign stop in Quebec on Wednesday to promote his green plan, which he says is the most realistic way for Canada to reach its targets for reducing greenhouse-gas emissions.

"I think young people are seeing more and more evidence that the carbon tax isn't working and if they want real action on the environment, they are turning away from the Liberal party," Scheer said at a hardware store in Jonquiere, north of Quebec City.

Scheer unveiled his plan last June, and Wednesday's discussion re-announced one facet of it -- a two-year tax credit he says will help make Canadian homes more environmentally friendly. The 20-per-cent refundable tax credit could be claimed by anyone who spent between $1,000 and $20,000 on energy-saving home renovations, saving a Canadian family up to $3,800 each year of the program.

That could include installing high-quality insulation and high-efficiency furnaces, replacing doors and windows, installing solar panels and upgrading ventilation, heating and cooling systems in an effort to cut energy use.

A report from the parliamentary budget office estimated the measure would cost the federal government a total of $1.8 billion by 2021-22.

The Conservatives had previously estimated the cost to be about $900 million.

Liberal Leader Justin Trudeau said this week he intends to exceed Canada's 2030 emissions target under the Paris accord and make Canada carbon neutral by 2050. Scheer said Wednesday he will stick with the 2030 target to cut greenhouse-gas emissions by 30 per cent below 2005 levels by 2030.

In 2017, Canada emitted an estimated 716 million tonnes of carbon dioxide and equivalent greenhouse gases. The current target for 2030 is 511 million tonnes.

Scheer's environment plan did not provide specifics for how many emissions each of the 55 policies would eliminate, but Wednesday he pointed to an analysis by consultant group EnviroEconomics that said his green renovation tax credit would eliminate 9.02 million tonnes of emissions.

However, that same analysis, done by environmental economist Dave Sawyer, says that overall Scheer's plan is inefficient, more costly than alternatives and "does not have a reasonable chance" of getting Canada to its 2030 Paris targets.

"It's a unique plan in that it both raises emissions and costs," he said.

Sawyer's analysis projects the overall cost per tonne of reduced emissions from the Conservative plan to be around $416, and the cost of the green tax credit itself at $439 per tonne.

Further, Sawyer said a Natural Resources Canada evaluation of a similar green tax credit under the previous Conservative government found 70 per cent of the renovations claimed would have been done without the tax incentive.

Scheer was on his third campaign swing through Quebec where he reflected on whether the province's voters were connecting with his vision, including if his push to build a pipeline through Quebec against the province's wishes or his personal views on social issues like abortion were hurting his chances.

Local candidates at the event said there's a real opportunity for the Conservatives to gain seats in Quebec.

The 2011 election changed the political landscape, with the Bloc Quebecois losing official party status and dropping to four seats, and the New Democrats sweeping across the province. The orange wave didn't hold in 2015, signalling a slight return for the Bloc who were able to get back to 10 seats.

Jean-Pierre Blackburn, a former minister in the Stephen Harper government, said he believes as the campaign continues, Scheer has connected more with voters in the province.

"He knows what Quebec wants," Blackburn said after Scheer's speech.

Philippe Gagnon, the Conservative candidate for Jonquiere-Haut-Saguenay, said he is not worried about a resurgence of the Bloc. He also dismissed concerns the party's climate plan won't align with Quebec voters.

"We are the party for our region."

Scheer was asked Wednesday whether the proposed tax credit, given it would cost $1.8 billion, is the most efficient way to reduce emissions.

Scheer said cutting down on emissions by helping Canadians to use less energy is only one part of the announcement.

"The other key part of that is helping make life more affordable for Canadians," Scheer said. "And when Canadians can take advantage of this homes tax credit to make renovations in their home, their own lives will become more affordable as the cost of living is reduced, because their energy consumption will go down."

The Conservatives say that in 2017, buildings accounted for 85 million tonnes, or 12 per cent, of Canada's greenhouse-gas emissions.

At a later event, Scheer was greeted with applause in the afternoon from about 40 people in a restaurant in nearby Alma. He then headed to Quebec City for an event with the party's candidate there.

--With files from Mia Rabson in Ottawa