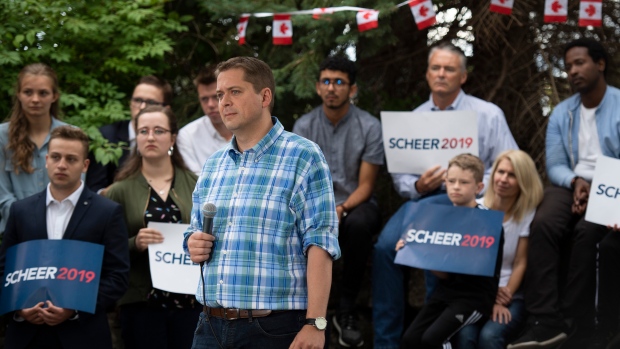 Conservative leader Andrew Scheer listens to questions during a campaign event in Ottawa on Saturday, Sept. 14, 2019. Scheer decided against taking a break from campaigning on the first weekend of the election campaign. , THE CANADIAN PRESS/Justin Tang

Scheer's first day on the West Coast included stops in suburban Vancouver and on Vancouver Island in three ridings the Conservative see as possible wins, but which are also thought to be tight three- and sometimes four-way contests.

He was met in Comox, on Vancouver Island's eastern coast, with polite applause and a few cheers by a couple of dozen people and the local candidate, Shelley Downey.

Scheer told them a Conservative victory nationally will require successes in B.C.

"We have to win seats here in British Columbia," he said. "We know that they will be battleground seats."

Comox is in North Island-Powell River, a region that has mostly flip-flopped between Conservatives and the NDP over the last several elections, but where the Liberals and the Green party are also eyeing possible wins. It is currently held by the NDP's Rachel Blaney.

Scheer also travelled to the NDP-held riding of Courtenay-Alberni in the resort town of Parksville on Vancouver Island.

But he started the day in Surrey, outside Vancouver, where he said he will cut the tax rate on the lowest federal income bracket -- the one charged on income up to $47,630 -- from 15 per cent to 13.75 per cent over the next four years.

"I wish I could say life has gotten easier for Canada's middle class but it has not," Scheer said. "People are working harder than ever but many are barely getting by or even falling further behind. They're definitely not getting ahead."

Scheer delivered the promise in a carefully crafted scene in Gretchen and Reed's living room -- the couple didn't want their last name used -- with perfectly placed cups of coffee, a plate of oatmeal cookies and a printout of a tax form on the coffee table in front of them.

Scheer has been critical of Liberal Leader Justin Trudeau for cutting tax credits the former Conservative government introduced to offset the costs of putting children in sports or arts classes, buying textbooks and using transit passes.

The Liberals eliminated those credits when they created the Canada Child Benefit in the 2016 budget, which rolled together a litany of previous benefits to help families with the costs of raising their children, and increased the total payout most people receive. Scheer has said he intends to keep that benefit in place as well.

The Liberals also cut the middle income tax rate from 22 per cent to 20.5 per cent.

Last Friday, Scheer promised to revive the transit tax credit, worth 15 per cent of the cost of monthly or annual transit passes.

In a round table with some supporters in Comox he told one woman asking whether he would restore income splitting for families or some of those family-oriented tax credits, to stay tuned because there will be more tax credits coming later in the campaign.

The parliamentary budget office estimates the cut will cost the treasury $6 billion a year if fully implemented, though Scheer said forgoing that revenue would still allow him to balance the federal budget in five years.

"We are absolutely committed to balancing the budget over a responsible period of time," he said.

Scheer said his platform will be fully costed and will include a commitment to increase funding for health care and education by at least three per cent a year.

"It's important to remember that massive deficits threaten those social programs," said Scheer.

Trudeau ran in 2015 on a promise to run budget deficits to invest in Canadians' needs but to get back to balance by 2019. However the most recent budget projected the 2019-20 year will have a $19.8-billion deficit.

Scheer said a two-income couple earning average salaries would save about $850 a year from his tax cut, which is roughly what he claims Canadians lost out on when Trudeau cancelled the tax credits, without taking into account additional funds from the increased child benefit.

Earlier Sunday, Scheer told reporters he would push to ratify the new North American free trade deal even though he thinks Canada got the short end of the stick on it. Scheer accused Trudeau of giving "concession after concession" to U.S. President Donald Trump, particularly on auto and dairy. But he said not ratifying the deal would lead to economic disaster for Canada so he would still push it through and try to get back some of what Canada lost later on.

Scheer is also still facing criticism about his decision to stick by candidates who have posted discriminatory things on social media. He said earlier Sunday that as long as candidates apologize and commit to treating everyone equally, he will not forbid them to run as Conservatives.

The comments are being unearthed by the Liberals, often released to coincide with appearances Scheer makes with them. Scheer said the dirt is flying because the Liberals are trying to distract from their own record.

However the Conservatives issued some of their own candidate research Sunday, pointing to a Liberal expected to be nominated in Quebec whom they say is a "radical activist" who targeted Jewish groups when he was a student politician at Montreal's Concordia University and posted conspiracy theories about the 9/11 terrorist attacks in the United States.

The Conservatives want the candidate, Sameer Zuberi in Pierrefonds-Dollard, to be fired. Scheer was asked why an apology was not good enough in that instance; he deflected by saying that Justin Trudeau's ethical violations and actions in the SNC-Lavalin scandal would have disqualified him from being greenlit as a Conservative candidate.

Rachel Curran, a former policy adviser to prime minister Stephen Harper, said on Twitter she is fine with people digging into the records and comments of candidates as long as it is being done for all parties, and listed a number of Liberal candidates she says have run into trouble with professional societies or made homophobic comments.