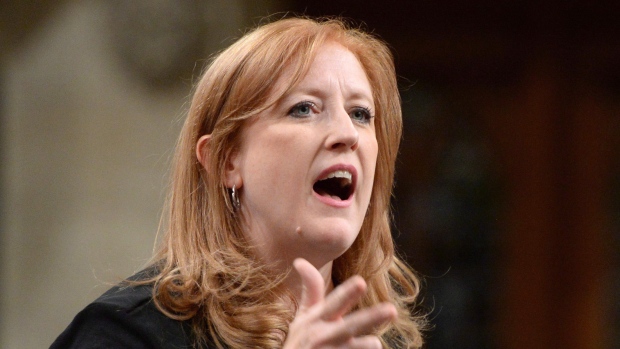 OTTAWA -- The Opposition Conservatives are tearing a strip off the Liberal government over TransCanada's decision to cancel the Energy East pipeline project.

Deputy Tory leader Lisa Raitt is blaming the decision squarely on what she described as the "disastrous" Liberal policies of Prime Minister Justin Trudeau.

"Today is the result of the disastrous energy policies promoted by Justin Trudeau and his failure to champion the Canadian energy sector," Raitt told a news conference on Parliament Hill.

New Liberal regulations on Canadian energy projects have forced companies to adhere to standards not enforced in other countries, giving exporters in Venezuela, Saudia Arabia and Algeria a competitive advantage, she continued.

"Justin Trudeau claims to support the middle class, but the truth is that the very people that the prime minister is claiming to help are the people most hurt by his misguided policies."

Energy Minister Jim Carr shrugged off Raitt's broadsides, insisting that the TransCanada decision was motivated entirely by business considerations influenced by the state of commodity prices. He also noted that the government already approved two other projects, the Trans Mountain and Line 3 expansions.

"I guess their role as the official Opposition is to try to score partisan political points," Carr said.

"I think it's my role to explain the government of Canada's position, nor should we be involved in some kind of race to the bottom comparing oil exports and imports from one country to another.... the regulatory process, which is our responsibility as the government of Canada, is unchanged and I think that's the most important point to make."

Carr pointed to the Trans Mountain expansion and the Line 3 project, both of which he said represent more than $11.6 billion in investment that will support "thousands" of jobs.

That Trans Mountain approval happens to be under a legal microscope this week as Indigenous and environmental groups and British Columbia cities argue the process failed to take into account the impact the pipeline could have on everything from killer whales to waterways.

The $7.4 billion pipeline, a project by a subsidiary of Kinder Morgan, is aimed at more than doubling the capacity of an existing line between Edmonton and Burnaby, B.C. The $7.5-billion, 1,660-kilometre Line 3 project by Enbridge Inc., meanwhile, would expand an existing pipeline between Hardisty, Alta., and Wisconsin, the goal being to increase export capacity to Chicago, the U.S. Gulf Coast and eastern refineries in both countries.

"Our government would have used the same process to evaluate the Energy East pipeline project that saw the Trans Mountain expansion and Line 3 projects approved," said Carr. "Nothing has changed in the government's decision-making process."

There are signs of growth in the energy sector despite "market challenges" fostered by the persistently low price of oil, he added.

"Canada is open for business. We offer a stable and predictable investment climate, world-class energy reserves, proximity to global markets, a skilled workforce and enabling services and technology."

Energy East had been proposed as a way to move Alberta oilsands production as far east as an Irving Oil operation in Saint John, N.B.

Supporters say Energy East was necessary to expand Alberta's markets and decrease its dependency on shipments to the United States. Detractors raised questions about the potential environmental impact.

Calgary-based TransCanada (TRP.TO) had announced last month that it was suspending its efforts to get regulatory approvals for the mega projects.

It will now inform the federal and provincial regulators that it will no longer be proceeding with its applications for the projects.

"After careful review of changed circumstances, we will be informing the National Energy Board that we will no longer be proceeding with our Energy East and Eastern Mainline applications," CEO Russ Girling said in a statement.

He added that TransCanada will also withdraw from a Quebec environmental review.