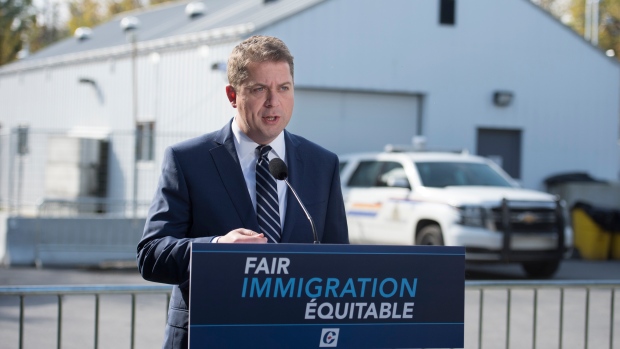 OTTAWA -- The Conservatives are to release their campaign platform on Friday, coinciding with the opening of advance voting, a party spokesman said Thursday.

Conservative Leader Andrew Scheer has vowed to balance the budget in five years, but his party has yet to release a full campaign platform on how that would be accomplished.

Those details won't emerge in time for Thursday night's French-language leaders' debate, the third and final of the televised contests.

At a campaign appearance in Quebec on Wednesday, Scheer said: "I can assure you that Canadians will see our fully-costed platform with plenty of time to make up their minds before they vote."

The advance polls open Friday at 9 a.m. and will run throughout the holiday Thanksgiving weekend before closing at 9 p.m. on Monday.

Scheer has said his platform would lay out his party's path to a balanced budget, complete with its targets on spending cuts and deficit reduction, and it will include the assessments of the parliamentary budget officer.

Liberal Leader Justin Trudeau has criticized Scheer for withholding the specific spending details of his platform until after the debates. In Monday's English-language debate, Trudeau called that "a disrespect for every Canadian."

The Liberals won the 2015 election on a platform to run deficits as a way to lift the economy by funding major infrastructure investments and tax reductions, but they broke their promises to return Canada to balanced budgets by the end of their mandate. The Liberals' 2019 platform has no timeline to eliminate them, and projects another four years of red ink: $27.4 billion next year, falling to $21 billion by the fourth year of a new mandate.

Scheer had no debate-day events on Thursday, but the Conservatives laid another plank in their platform by matching a Liberal promise to extend employment insurance leave by 15 weeks for adoptive parents, who currently only receive 35 weeks of EI-funded leave, and expand a tax credit for them.

Trudeau made an early-morning visit to pumpkin patch in rural Ottawa, where he helped collect a wagonload of gourds with several young children, including his son, Hadrien. It was part of the ongoing targeting by the Liberals of the semi-rural riding of Carleton, where they are trying to knock off Conservative attack dog Pierre Poilievre.

The Liberals released new ads on Thursday that took aim at Scheer, hoping to deflect from scrutiny of Trudeau himself with the Liberal leader saying in one ad that Scheer "wants you to think this election is about me -- I think it's about you."

Earlier Thursday, NDP Leader Jagmeet Singh laid out the conditions it would take to earn the support of the NDP in a minority Parliament.

Electoral reform is an especially sore spot for the Liberals, who promised that the 2015 election would be the last under the traditional first-past-the-post electoral system, only to scuttle the recommendations of the committee they put together to examine the issue.

Singh's NDP backs a system of mixed-member proportional representation, which advocates say better reflects the will of voters as expressed in the popular vote. Singh said the issue is about "giving power back to people."

"Canadians should not have to be in this position where Mr. Trudeau is telling them to vote out of fear, to settle for less, to say, 'OK, we may not be perfect, we might have broken our commitments on things, but vote for us anyways because you're afraid of another party,"' Singh said, foreshadowing what he expects to voters to hear as election day nears.

"I want to end that once and for all and so I want to say to Canadians, with a New Democrat government, with more New Democrats in place, we can deliver that."

With just over a week to go before voters go to the polls, the federal parties made a push Thursday to frame the dinner conversation this holiday long-weekend, boiling it all down to one word: Choice.

Trudeau is likely to face continued attacks from his opponents at Thursday night's leaders' debate, which starts at 8 p.m. ET in Gatineau, Que., within sight of Parliament Hill. It is one last big chance for the six leaders to make their marks before the Oct. 21 election, especially on the volatile electorate in Quebec.

Singh said much of his focus will be on attacking Trudeau, despite polling that suggests the Bloc Quebecois are gaining ground in Quebec at the expense of the New Democrats. Singh dismissed the Bloc and leader Yves-Francois Blanchet as not being able to work with the rest of Canada to deliver on major promises.