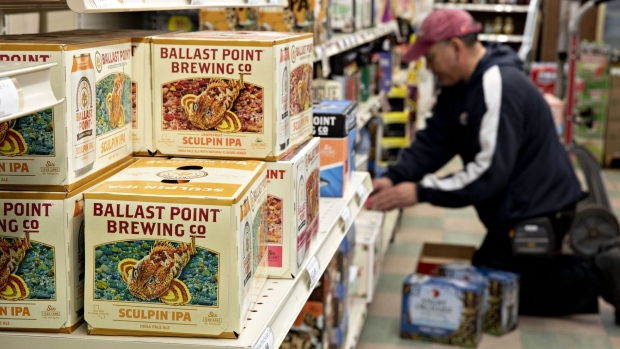 (Bloomberg) -- Constellation Brands Inc. is getting rid of Ballast Point, the craft beer brand it bought for about $1 billion just four years ago.

The alcoholic beverage giant is selling the brand and some associated production facilities and brew pubs to Kings & Convicts Brewing Co., Constellation said Tuesday in a statement. Terms weren’t disclosed.

The small company based in Highwood, Illinois, about 30 miles north of Chicago, may be getting a deal for Ballast Point. Constellation had bought the brand in 2015 to bolster its craft brews. But less than two years after that, the company said Ballast wasn’t growing as expected, forcing it take an impairment charge.

Constellation had written down the brand multiple times, citing increased competition, most recently estimating the trademark’s fair value at $17 million in an October quarterly filing, down from $223 million in early 2017.

When Constellation bought Ballast Point in 2015, the craft-beer craze was peaking in the U.S., with AB InBev and Heineken NV also racing to snap up growing brands as consumers ventured beyond their familiar Buds. But health-conscious younger drinkers have been shunning beer altogether in favor of low-carb hard seltzers such as White Claw, putting pressure on small and big beer brands alike. Constellation is working on a new 90-calorie hard seltzer under its Corona name.

Kings & Convicts brews ales and lagers sold in their own location, and across Chicago area and southern Wisconsin bars. Its taproom also boasts a golf simulator that customers can rent. The transaction is expected to close in Constellation’s fiscal 2020.

Constellation has been more focused on expanding its quickly growing Modelo Especial Mexican import brand across the U.S. Constellation, which also sells Corona in the U.S., is investing in advertisements to bring the Modelo name into more non-Hispanic homes.

--With assistance from Crayton Harrison.

To contact the reporter on this story: Leslie Patton in Chicago at lpatton5@bloomberg.net