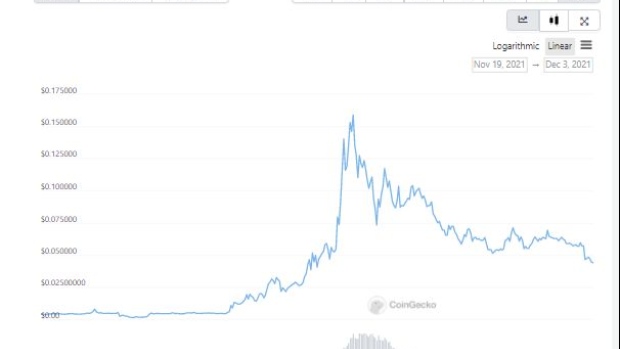 (Bloomberg) -- The saga of the ConstitutionDAO is taking a not-so-unlikely pivot in the topsy-turvy world of cryptocurrencies as speculators seek to turn tokens from the failed crowdfunding entity into the latest meme coin.

The DAO, or decentralized autonomous organization, which effectively exists on the blockchain, minted billions of People tokens with the aim of buying a rare copy of the U.S. Constitution. But the group came up short at a Sotheby’s auction and lost to hedge fund billionaire Ken Griffin. In the days following, ConstitutionDAO decided to disband, refund the more than $40 million raised to those who donated to the effort and set up the automatic destruction, or burning, of the tokens.

That’s when things got interesting. Instead of seeking a refund at a loss because of high blockchain transaction fees, some donors and speculators are accumulating the so-called governance tokens issued by the DAO on a bet that they’ll follow the trajectory of meme coins like Shiba Inu that rallied despite having no particular purpose besides making the holders wealthy. So far the gambit appears to be paying off, with the People tokens having surged more than 900% in value.

To be sure, the amounts remain microscopic. Each People token is worth about 0.00001031 Ether, the coin derived from open-source blockchain Ethereum, or roughly 4 cents, up more than 10-fold since they began trading at fractions of a penny on Nov. 19, according to CoinGecko. At its peak -- hit over the Thanksgiving weekend -- the tokens were worth roughly 16 cents.

The frenzy is attracting the attention of some big industry participants. The crypto exchange OKEx has listed the token for trading, and now holds about 1.3 billion of the tokens, or 27% of those created on its platform, according to crypto analytics platform Etherscan.

“People is gradually becoming a community-owned token, and OKEx has always been at the forefront of listing tokens that are owned 100% by the community, like SHIB and many others,” said Lennix Lai, a director of financial markets at Seychelles-based OKEx. “We are pleased to be able to offer our customers more investing opportunities as we list more diversified and community owned tokens, and continue to support the greater development of DeFi.”

People token holders have destroyed roughly 55% of digital coins, according to crypto blocks and analytics platform Dune Analytics, despite the secondary market for trading them.

Rex St. John, a Seattle-based self-described “People believer” and software developer, deposited his 56,000 tokens to his Metamask crypto wallet instead of seeking a refund, because he said, he would have had to take out a loan to afford to pay the associated transaction or “gas” fees for the Ether-based transaction.

“As all the other crypto tokens were tanking, People was spiking. At that point I thought it was becoming a meme coin. Everyone transferring to the Black Hole is making a mistake,” St. John, 37, said, referring to the token incinerator on the DAO funding platform Juicebox. “You can sell on Uniswap for 10 cents each and they were minted for less than a cent.”

In one day over the Thanksgiving holiday, St. John’s $200 worth of People tokens were momentarily valued at about $7,200. No wonder the crypto crowd is betting that the tokens could turn out to be the next Shiba.