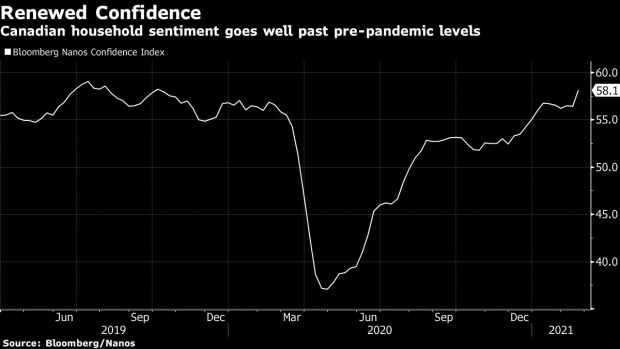 (Bloomberg) -- The easing of lockdown restrictions in Canada is propelling a surge in consumer confidence levels.

The Bloomberg Nanos Canadian Confidence Index, a gauge of household sentiment, jumped last week to the highest since October 2019 after the country’s two largest provinces -- Ontario and Quebec -- began to unwind containment measures.

The easing of restrictions, combined with an ongoing vaccine rollout and hot housing and stock markets, are keeping sentiment elevated despite concerns around Covid-19 variants and their spread.

The complete bounce-back in confidence highlights how Canadian households have emerged from the deep economic crisis largely intact. That’s stoking expectations consumers will drive the recovery in coming months.

Every week, Nanos Research surveys 250 Canadians for their views on personal finances, job security and their outlook for both the economy and real estate prices. The index jumped to 58.2 from 56.5 the previous week, the largest one-week increase since July.

The index had plunged by a record one third in March and April, before beginning its climb back over the summer. The rebound stalled between September and November amid a second wave of virus cases, but the rollout of Covid-19 vaccines has sent sentiment levels back up, buoying everything from job security to the economic outlook.

The increase in the sentiment index was driven by renewed optimism about growth. Nearly 28% of Canadians think the economy will be stronger in the next six months, the highest share in three years.

Real estate sentiment is unwavering with 52% of respondents believing property values in their neighborhood will increase over the next six months. That matches the highest ever for the question amid a housing boom that has driven prices to a record.

Sentiment is highest in Quebec and lowest in the prairie provinces.