Just like that, Canadians are feeling a lot less gloomy.

The Bloomberg Nanos Canadian Confidence Index -- a composite indicator derived from weekly surveys of Canadian households -- hit 58.3 last week, up from 55.5 at the end of May. That’s the second biggest one-month increase since 2015 and brings the gauge to the highest level since February 2018.

It’s a dramatic turnaround in confidence. Up until last month, consumer sentiment had been at depressed levels for more than a year as households grappled with everything from rising global trade tensions, a weakening housing market and volatile financial markets.

But the tide turned as the nation’s housing markets stabilized and economic data improved. Other potential factors were President Donald Trump’s lifting of metals tariffs on Canada and Prime Minister Justin Trudeau’s decision to press ahead with the construction of a new oil pipeline.

Borrowing costs have also come down since the start of the year, while a stronger Canadian dollar over the past month has also buoyed sentiment. 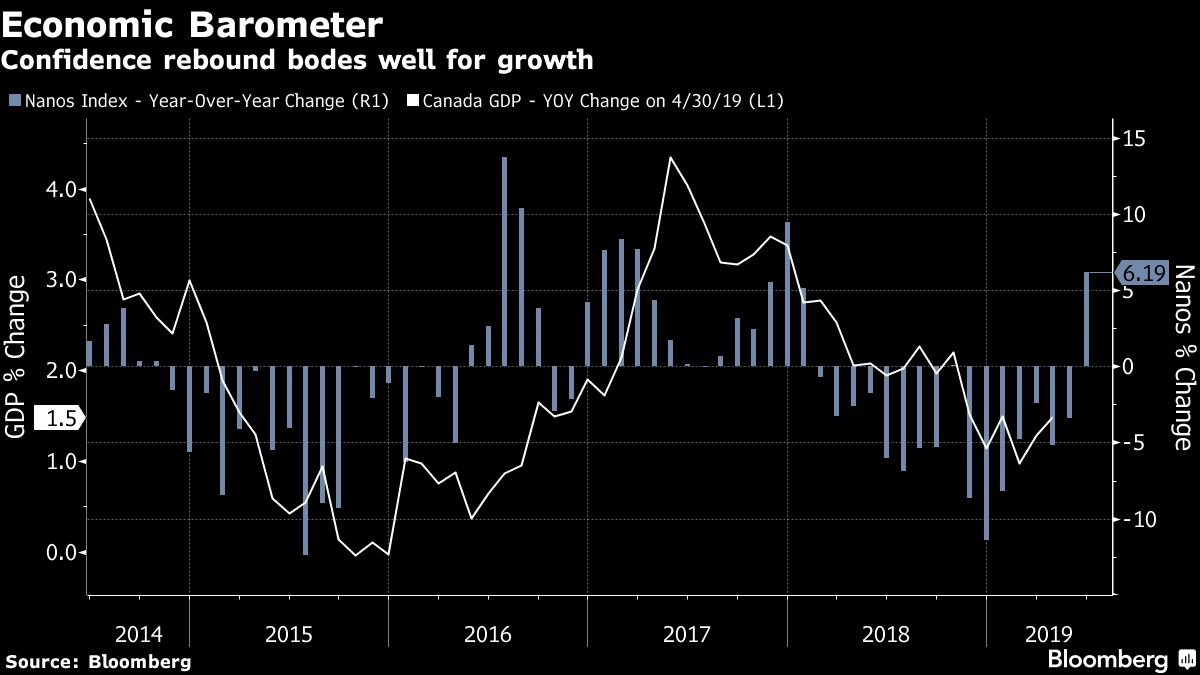 -Canadians are feeling better about their personal finances. The percentage of respondents who said their finances have improved over the past year rose to 23.4 per cent last week, the highest score for this question since 2016

-There’s more optimism about growth. The share of respondents who believe the economy will strengthen in the next six months rose to 18.5 per cent last week, the most since November last year. Those who see it weakening dropped to 25.5 per cent, the lowest since February 2018

-Job security is the only indicator that remains below average, but it too has come up from depressed levels over the past month. Slightly more than 66% of Canadians feel secure about their job, up from 64 per cent at the end of May

-Improving sentiment was reported across Canada, with respondents in Quebec posting the strongest confidence numbers