U.S. consumer prices climbed in April by the most since 2009, topping forecasts and intensifying the already-heated debate about how long inflationary pressures will last.

The consumer price index increased 0.8 per cent from the prior month, reflecting gains in nearly every major category and a sign burgeoning demand is giving companies latitude to pass on higher costs. Excluding the volatile food and energy components, the so-called core CPI rose 0.9 per cent from March, the most since 1982, according to Labor Department data Wednesday.

The gain in the overall CPI was twice as much as the highest projection in a Bloomberg survey of economists. Similar to last week’s monthly jobs report, forecasters are struggling to get a handle on the rapidly reopening economy. 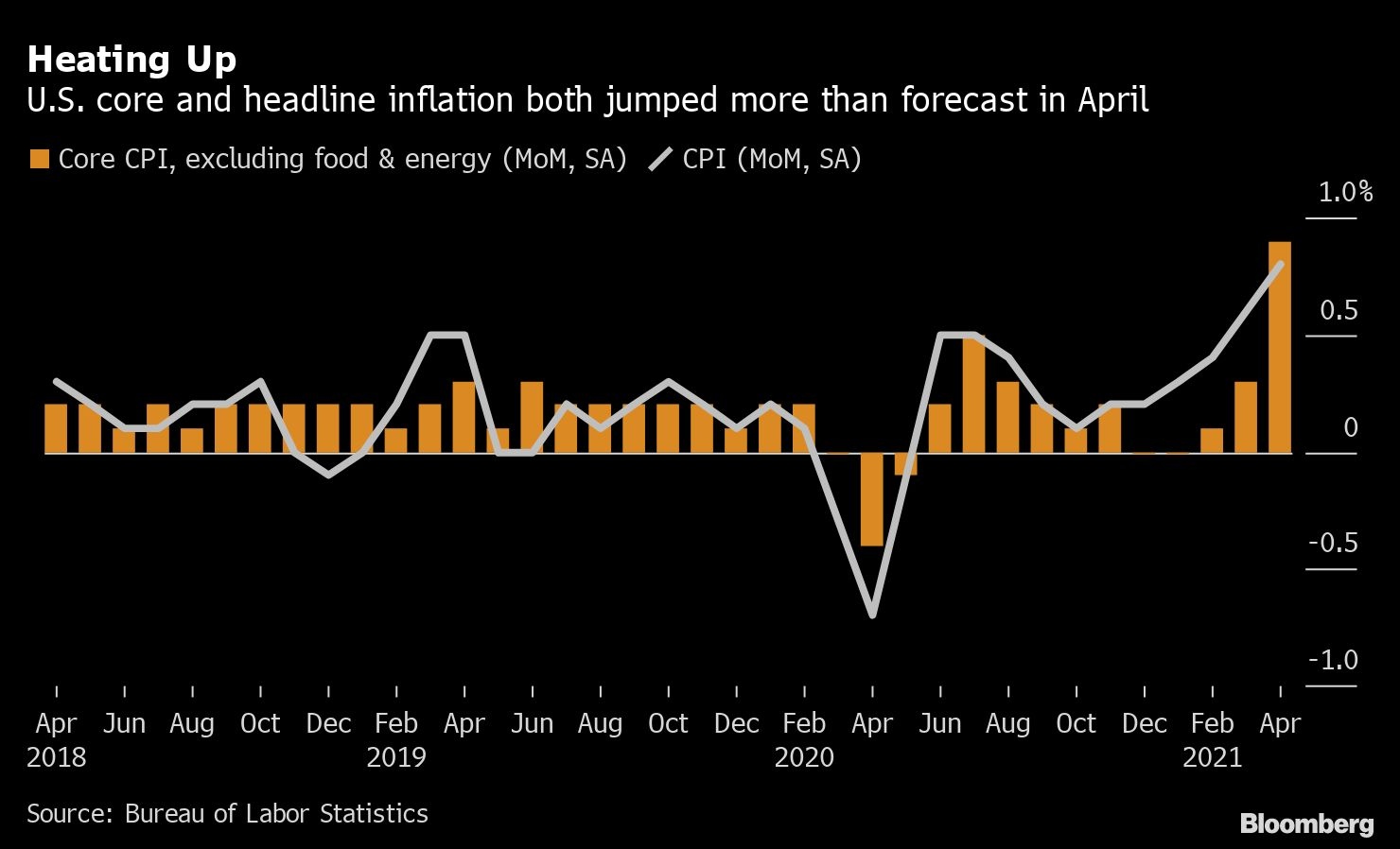 “Transitory pandemic influences clearly contributed to the surprise but there’s residual firmness in core inflation that’s hard to ignore,” said Michael Gapen, chief U.S. economist at Barclays Plc. Aside from the reopening effect, “there was still some residual firmness that suggests risks around inflation in the near term are still skewed to the upside.”

Treasuries fell on the inflation surprise, with the 10-year yield rising to 1.67 per cent, while S&P 500 declined.

The annual CPI figure surged to 4.2 per cent, the most since 2008 though a figure distorted by the comparison to the pandemic-depressed index in April 2020. This phenomenon -- known as the base effect -- will skew the May figure as well, likely muddling the ongoing inflation debate.

While Federal Reserve officials and economists acknowledge the temporary boost, it’s unclear whether a more durable pickup in inflationary pressures is underway against a backdrop of soaring commodities costs, trillions of dollars in government economic stimulus and incipient signs of higher labor costs.

“I was surprised,” Fed Vice Chairman Richard Clarida said after the report. “We have pent-up demand in the economy. It may take some time for supply to rise up to demand.”

The core CPI measure, which was also biased higher by the base effect, rose 3 per cent from 12 months ago. That was the largest since 1996. For the last year the annual core inflation metric had held below 2 per cent.

Wednesday’s report offers insight into bubbling price pressures across parts of the economy. Wages have shown signs of picking up, and supply chain challenges have elongated delivery times and driven materials prices higher.

While challenging for producers, swelling consumer demand has also given firms more confidence that they will be able to pass along some of the new costs. If sustained, the production bottlenecks could pose a risk of an acceleration in consumer inflation.

Fed Chair Jerome Powell has said the upward pressure on prices from the rebound in spending and supply bottlenecks will have only a “transitory” impact on inflation, but many disagree. Bond market expectations for the pace of consumer price inflation over the next five years surged earlier this week to its highest level since 2006.

The Labor Department’s data showed a 10 per cent surge in the cost of used vehicles that accounted for more than a third of the increase in the overall CPI. New-vehicle prices also picked up.

Shelter costs, which make up a third of the overall CPI, jumped by the most in two years as rents and hotel stays advanced. Prices at hotels and motels increased by the most on record, while airfares also posted the biggest gain on record -- a reflection of a broader reopening of the economy. 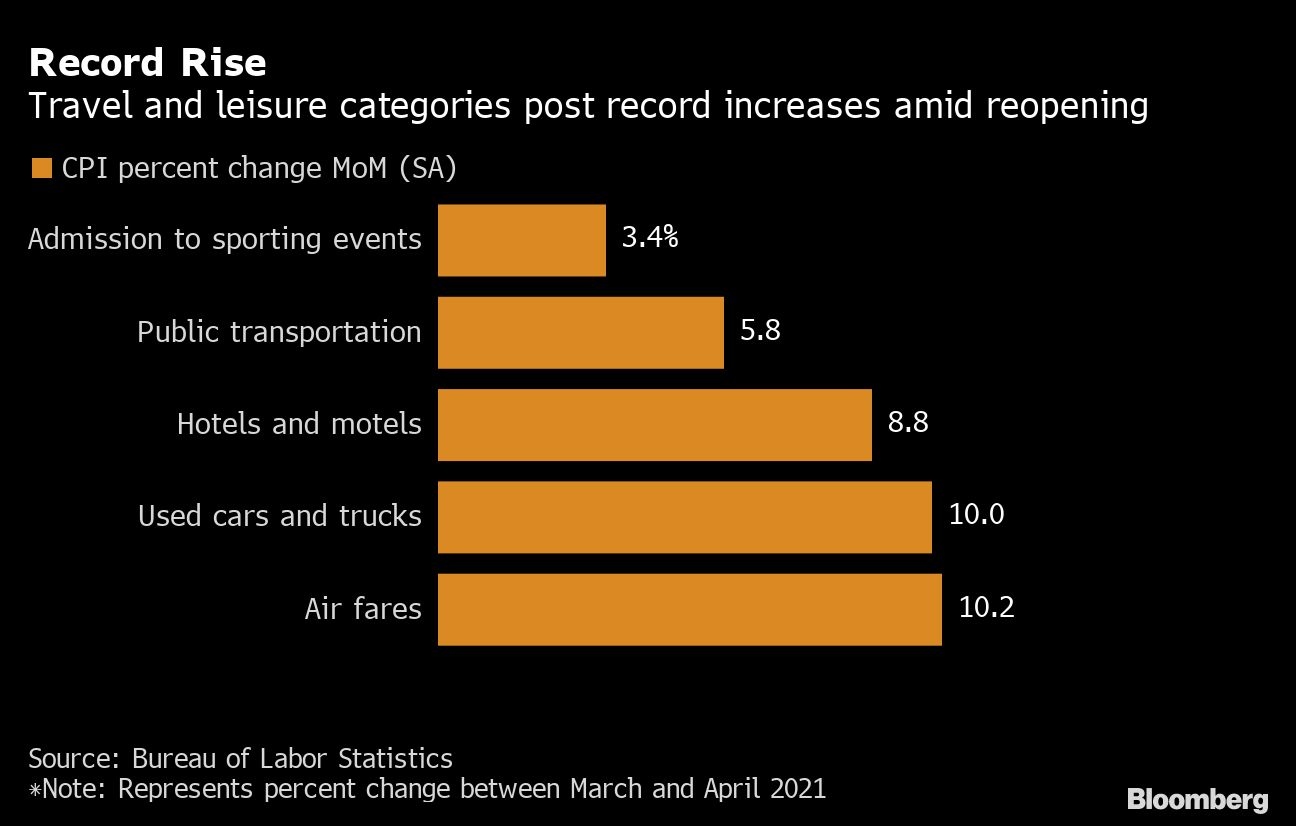