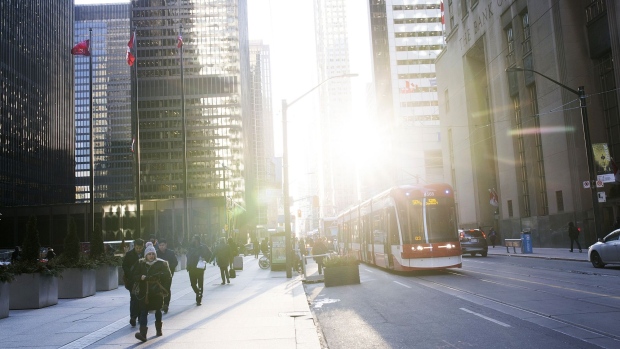 Pedestrians walk past a Toronto Transit Commission (TTC) streetcar moving through the financial district of Toronto, Ontario, Canada, on Friday, Feb. 21, 2020. Canadian stocks declined with global markets, as authorities struggled to keep the coronavirus from spreading more widely outside China. However, investors flocking to safe havens such as gold offset the sell-off in Canada's stock market. Photographer: Stephanie Foden/Bloomberg , Bloomberg

Consumer confidence went into a tailspin as half a million Canadians applied for unemployment benefits.

The Bloomberg Nanos Canadian Confidence Index, based on telephone surveys of households, recorded its biggest one-week drop ever and reached the lowest level since 2013, when weekly tracking began.

The sudden deterioration in sentiment highlights the extent to which Canadians have been startled by the sudden halt of economic activity, capped by Prime Minister Justin Trudeau’s announcement Friday that a record 500,000 people applied for jobless claims last week. 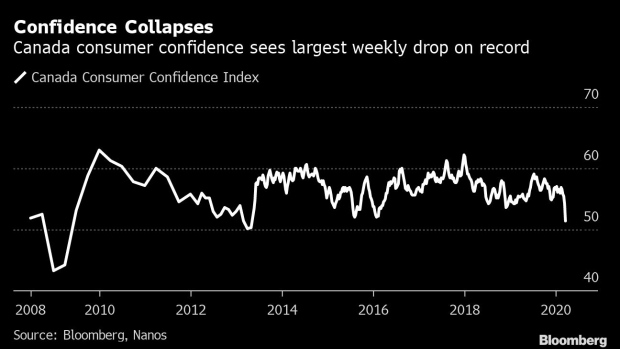 The spike in pessimism was driven by a gloomier outlook for the nation’s economy, the survey found. Some 55% of respondents now expect Canadian output to be weaker six months from now, the highest proportion since the financial crisis began in 2008.

Policy makers have so far unveiled plans to inject hundreds of billions in direct aid and liquidity into the economy. But the eye-popping jobless numbers and plummeting consumer sentiment mean government and central bank rescue efforts are only just beginning.

As the coronavirus pandemic paralyzes economies globally, energy-heavy Canada is also contending with the crash in oil prices, prompting a steady drumbeat of recession calls. The Bank of Montreal and Bank of Nova Scotia released new forecasts Friday that showed the Canadian economy will contract by at least 10% annualized in the second quarter of this year.

Every week, Nanos Research calls 250 Canadians for their views on personal finances, job security and their outlook for both the economy and real estate prices. Bloomberg publishes four-week rolling averages of the 1,000 telephone responses.

The aggregate index number dropped to 51.3 last week, down from 54.3. The one-week decline is the largest since Nanos began weekly tracking for the index in May 2013. Before then, the telephone poll was done monthly.

The survey also points to potential weakness in Canada’s housing market. The share of Canadians who believe housing prices will increase recorded its biggest one-week drop also since at least 2013, though sentiment for real estate still hasn’t collapsed and remains within historical averages.

What continues to hold up in the survey are the two pocketbook-related questions. Despite recent drops in global stock markets, Canadians sense of their personal finances has shown only a marginal deterioration. Job security numbers are also within historical averages.

While all regions of the country recorded major declines in optimism, the prairie provinces were the hardest hit, with confidence collapsing to the lowest level there on record.