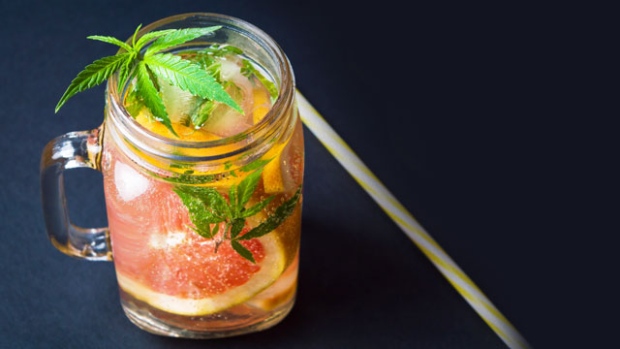 The market for marijuana-infused beverages could explode to $600 million in the next four years. , Image courtesy of Market One Media

As consumer tastes shift away from soda, more and more people are turning to enhanced waters infused with ingredients and flavors as an alternative to plain bottled water.

Consider these results from a recent consumer survey by Mintel:

According to the Beverage Marketing Group, annual bottled water consumption per capita in the United States increased from 1.6 gallons in 1976 to 42.0 gallons in 2017 — a 2500 per cent increase. Transparency Market Research estimates the global bottled water market will grow by more than 50 per cent from US$199 billion in 2017 to US$307 billion by 2024 — this sector is fast tracking growth and it should be watched.

The biggest names in the beverage sector are acquiring brand to diversify their portfolios. Keurig Dr Pepper has agreed to a deal to acquire U.S.-based premium water company, Core Nutrition LLC, for US$525 million.

It’s a fertile environment for companies that can develop bottled water brands that appeal to today’s consumers. It’s also one that has beverage industry titans like Coca-Cola and Pepsi scanning the marketplace for potential acquisitions.

“We have big a footprint now in the U.S. We’re a stable operation with a great revenue base.”

One enhanced water brand that has definitely gained traction in recent years is Alkaline88®, a high-pH water produced by The Alkaline Water Company Inc. (TSX.V: WTER).

With a fast-growing distribution network, particularly in grocery stores, Alkaline88® has grown over 435 per cent over the past four years. Its revenues for the most recent fiscal year (FY 2018) were US$19.8 million. The company says it’s on track to more than double that total in its current 2019 fiscal year.

Alkaline88® is now sold in all 50 U.S. states through 47,500 retailers. Retails giants Walmart and Kroger both carry the brand in their stores and the product is now available in 39 of the “Super 50 Progressive Grocers of 2018.”

A Trademark on the Alkaline Name

One key advantage Alkaline88® has in the sector is the trademark rights to the word “alkaline” in its brand name. The product uses a state-of-the-art Electrochemically Activated Water (ECA) system to create an alkaline water with an 8.8 pH.

The technology the company is using is fully scalable, as demonstrated by recent growth in its co-packing facilities. New enhancements to the technology have doubled available capacity, and the company now has seven co-packers nationwide located within 600 miles of 95 per cent of the U.S. population. Aaron Keay, Chairman of The Alkaline Water Company, notes, “We have big a footprint now in the U.S. We’re a stable operation with a great revenue base.”

The company’s efforts have put it in a good position to compete for a sizeable piece of the US$18.5 billion bottled water market. As the fastest growing alkaline water brand in the U.S., Alkaline88® has positioned itself for both future growth and a potential takeout by one of the larger players in the industry.

The company added a new wrinkle to its growth strategy recently with the launch of its A88 Infused Beverage Division. A wholly-owned subsidiary of The Alkaline Water Company, A88 Infused will focus on developing four new categories: a hemp-derived CBD-infused water, a naturally flavored water, a natural sparkling water, and a water infused with natural vitamins and minerals.

All four of these new categories will build off of the Alkaline88® brand. The one that has the most potential — and the most potential launch barriers — is the hemp-based CBD product. As the company looks to expand its footprint, both in Canada and internationally, it is prepared to work with jurisdictions to get distribution approval for this product.

Keay, who has made his name in the Canadian capital markets and recently in cannabis industry, took VIVO public and raised $135M. He is confident in WTER’s strategy for core product growth and the new infused line, particularly CBD. He notes, “We’re on track to have US$40 million in U.S. sales in our current fiscal year. We will make sure we’re operating within state and federal regulations with our hemp product, so we don’t jeopardize the overall brand.”

On October 2nd, CNBC released an article on how PepsiCo is looking into how they can make their mark in the cannabis industry. Markets where cannabis is legal or soon to be legal have piqued interest from various food and beverage companies all looking for future growth — whereas, Coca-Cola is focusing more on CBD infused beverages.

As far as international growth goes, WTER plans introduce the hemp-based CBD product into countries with clear regulations and rules. That screen puts Canada, with its current legalization of recreational marijuana, squarely in the company’s sights.

Between the potential of these new product lines and the impressive growth of the flagship Alkaline88®, Alkaline Water (TSXV: WTER) is gearing up for a busy next few years.