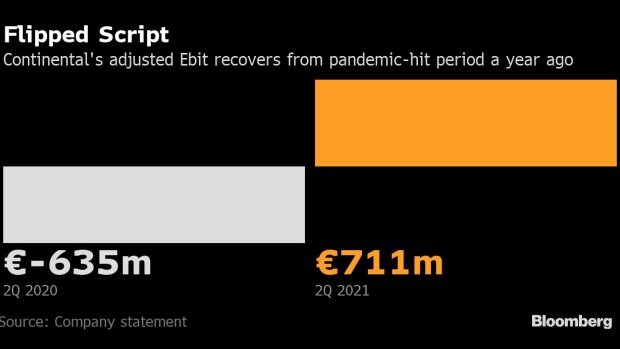 A worker collects customer orders near automotive components, manufactured by Continental AG, at the Autodoc GmbH online car-parts dealer automobile component warehouse in Berlin, Germany, on Monday, June 28, 2021. Autodoc could seek a valuation of as much as 10 billion euros ($11.9 billion) in an initial public offering, according to people familiar with the matter. Photographer: Liesa Johannssen-Koppitz/Bloomberg , Bloomberg

(Bloomberg) -- Continental AG, Europe’s second-biggest supplier of car parts, warned the global bottleneck in chip supply and raw material cost inflation will drag on the auto industry through the rest of the year.

The maker of tires, brake systems and electronic components reported better-than-expected adjusted earnings before interest and taxes for the second quarter and raised the low end of forecasts for annual revenue and margins. But it also trimmed its yearly projection for industrywide production growth to 8% to 10%, from 9% to 12%.

“The chip supply shortage and rising raw material prices will weigh on the automotive industry for all of 2021,” Chief Executive Officer Nikolai Setzer said in a statement Thursday. Continental shares slumped as much as 4.4% in Frankfurt trading.

The supply woes idling car plants have led most manufacturers to set conservative expectations for the year even after a strong first half. BMW AG this week kept its profit forecast unchanged and Volkswagen AG warned the constraints will get worse during the second half of the year. Chip challenges and continued fallout from the pandemic have hit Continental at a time of declining returns that prompted the manufacturer to announce plans last year to cut or transfer some 30,000 jobs.

For the rubber unit -- with products spanning tires, hoses and industrial conveyors -- Continental raised its estimate for the drag higher raw material prices will have on the business to 500 million euros, from 350 million. The company still upped its forecasts for revenue and returns at the division as it passed on higher input costs.

The separation will form a standalone company spanning EV and combustion-powertrain components as well as sensors. Vitesco may pursue acquisitions of smaller companies to grow faster in some regions, as well as potentially a larger transaction to gain an edge in a rapidly reshaping industry, Vitesco CEO Andreas Wolf said last month.

(Updates with shares in the third paragraph.)