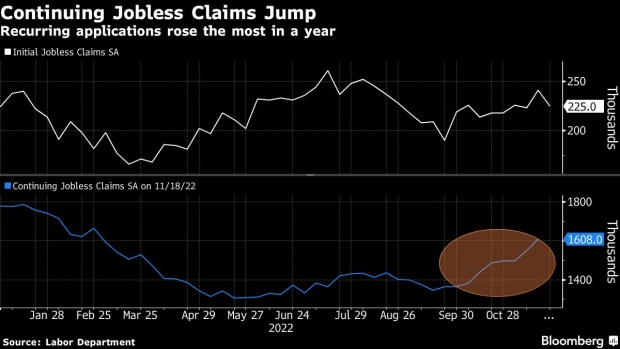 A representative conducts an interview during a job fair hosted by Majorel at the Renaissance Center in Detroit, Michigan, U.S., on Wednesday, Feb. 25 2022. The customer experience company plans to hire about 200 full time employees for their new office opening in downtown Detroit in the coming months. , Bloomberg

(Bloomberg) -- Recurring applications for US unemployment benefits rose to the highest since February, suggesting that Americans who are losing their job are having more trouble finding a new one in a labor market that’s gradually cooling.

Continuing claims, which include people who have already received unemployment benefits for a week or more, rose by 57,000 to 1.6 million in the week ended Nov. 19, the biggest jump in a year.

Initial unemployment claims meanwhile decreased by 16,000 to 225,000 in the week ended Nov. 26, Labor Department data showed Thursday. The median estimate in a Bloomberg survey of economists called for 235,000 applications.

Economists have been watching continuing claims more closely in recent weeks as they serve as an indicator of how hard it is for people to find work after losing their job. They’ve also been known to hint at upcoming recessions. Although the gauge has been rising for the last two months, it’s still near historic lows.

The Federal Reserve’s aggressive course of interest-rate hikes this year has yet to significantly dent the labor market, while other parts of the economy have more obviously slowed down. Chair Jerome Powell said Wednesday demand for workers still far exceeds supply, and that the central bank would prefer to resolve the imbalance by restraining payrolls growth rather than via outright job losses.

While there’s been a wave of layoffs at high-profile technology and banking companies, it’s still largely contained to a few industries. Meanwhile, data out Wednesday showed job openings declined and wage gains moderated in October, suggesting demand for workers might be starting to abate.

Read more: The Smallest US Businesses Are Laying Off the Most Workers

On an unadjusted basis, initial claims fell by about 50,000 to 198,557 last week. California, Texas, Illinois and Georgia led the drop.

The jobless claims data tend to be more volatile around holidays, and last week included Thanksgiving. The four-week moving average, which smooths out such volatility, edged up to 228,750.

“The drop in initial jobless claims for the week ended Nov. 26 is more a product of notoriously volatile data around holidays such as Thanksgiving than an indication of job-market vigor.”

The figures precede Friday’s monthly employment report, which is forecast to show US employers scaled back hiring in November and the unemployment rate held at 3.7%.

Separate data released Thursday showed that a gauge of US inflation rose in October by less than expected while consumer spending firmed. S&P 500 futures extended gains after the reports, while the yield on 10-year Treasury remained lower.