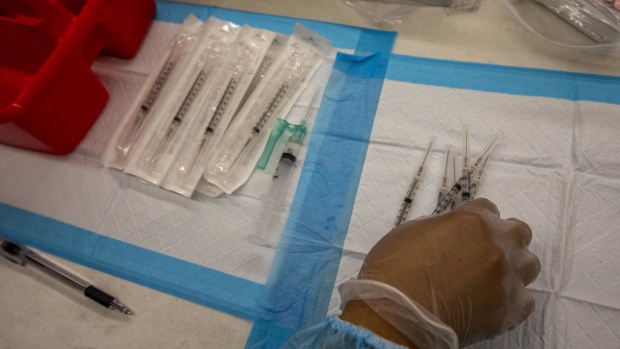 (Bloomberg Law) -- President Joe Biden’s power to mandate Covid-19 vaccinations for federal contractors was under attack in two federal courtrooms Friday, with a pair of judges appointed by the Trump administration considering whether to up the tally of states where the measure is blocked.

Attorneys for Texas and a seven-state coalition led by Georgia told the judges that Biden overstepped his authority with an intrusive policy for contractors that’s actually just cover for his real agenda of getting Americans vaccinated.

Biden administration lawyers defended the president’s power to set the terms for federal contracts as long as its related to economic efficiency, as it is with ensuring contractor workers can perform instead of being sick with Covid-19. The government lawyers also argued that the states lack the standing to sue because they haven’t been harmed by the mandate, which generally doesn’t apply to existing contracts until they’re modified, renewed, or extended.

Biden’s contractor mandate, which covers roughly a quarter of the U.S. workforce, sparked a series of federal lawsuits from states with Republican attorneys general filed in Florida, Missouri, Arizona, Kentucky, Georgia, and Florida.

One federal judge already has blocked the federal contractor mandate, but that order applies in the states that sued rather than nationwide. That court order shut down the requirement in Kentucky, Ohio, and Tennessee while litigation proceeds.

Nearly 49 million Americans have been infected by the coronavirus and more than 787,000 have died as of Friday, according to the Bloomberg Covid-19 Tracker.

Much of the Friday hearings in Texas and Georgia focused on the standing issue. Georgia called three officials from different universities in the state to testify about the alleged harm that the mandate has caused them, which included the cost of tracking individuals’ vaccination status and the concern that they’ll lose difficult-to-replace workers who won’t get the shot.

But Georgia was only able to identify one contract that a state university is bidding on that included the vaccine mandate, said Justice Department lawyer Vinita Andrapalliyal. That’s not enough to let seven states seek a preliminary injunction, she said.

In Texas, U.S. District Judge Jeffrey Brown said he was concerned with the lack of evidence showing that contracts are in imminent danger of being altered. He gave the state until Monday to submit details of “contracts it fears will be directly affected soon.”

While U.S. District Judge Stan Baker in Georgia also probed the lawyers on issues related to standing, he frequently asked what the proper scope of an injunction would be should he decide to issue one.

To contact the reporter on this story: Robert Iafolla in Washington at riafolla@bloomberglaw.com

To contact the editor responsible for this story: Jay-Anne B. Casuga at jcasuga@bloomberglaw.com