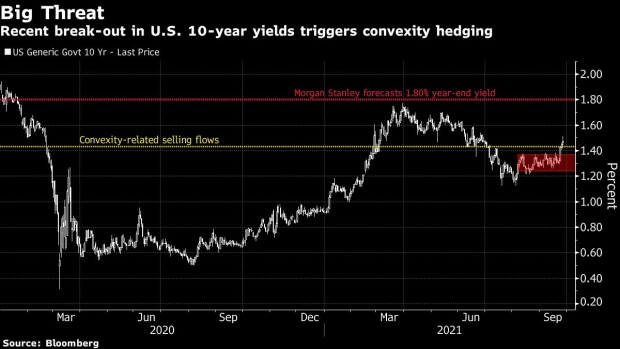 (Bloomberg) -- The latest burst higher in Treasury yields could get an extra push from hedging flows linked to mortgage-backed securities and a cold shoulder from Japanese investors, often known to buy the dip in the U.S. government bond market.

The climb in yields since last week’s Federal Reserve meeting “has brought the mortgage universe closer to the point of peak negative convexity,” Morgan Stanley agency MBS strategists wrote in a Sept. 24 note. Negative-convexity hedging involves selling Treasuries to compensate for a scenario where rising yields lengthen the duration of mortgage debt as refinancings slow.

It was the same dynamic seen back in March, when comments from Fed Chair Jerome Powell drove U.S. 10-year yields toward their peak level of 2021 approaching 1.8%. That move soon faded as buyers of Treasuries emerged and because the Fed’s large footprint in the mortgage market, thanks to its monthly purchases of MBS, has muted the impact of convexity-hedging flows.

Morgan Stanley sees 10-year yields rising to 1.8% by the end of the year, versus a high of about 1.51% Monday. That’s because the break of the roughly 1.24%-to-1.37% range -- which had broadly held over the past couple of months --  “can encourage duration repositioning across mortgage portfolios,” wrote Matthew Hornbach, a strategist.

Morgan Stanley also cites a lack of Japanese investor appetite to buy Treasuries amid the back-up in yields, particularly from commercial banks, as a reason to expect a further selloff.

Recent gains in Japanese shares have “reduced the incentive for banks in Japan to earn income and, possibly, capital gains,” the strategists said.

This week’s U.S. debt auctions could provide an additional catalyst for higher yields. The market appeared to easily absorb Monday’s double sale of 2- and 5-year notes, but not before 5-year yields reached the highest levels since February last year. The week’s auction conclude with a $62 billion 7-year note sale Tuesday.