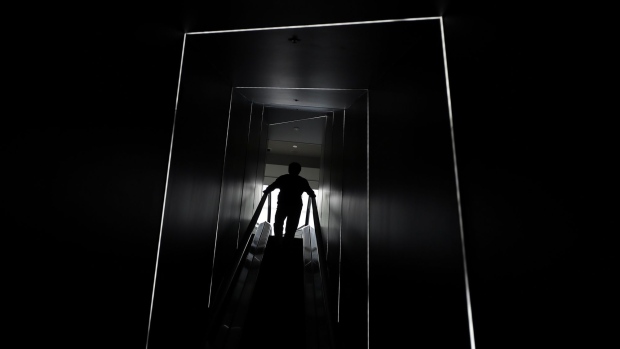 A visitor is silhouetted while riding on an escalator leading to the Shibuya Sky observation deck of the Shibuya Scramble Square building in Tokyo, Japan, on Tuesday, Sept. 29, 2020. The Bank of Japan (BOJ) will release its quarterly Tankan business sentiment survey on Oct. 1. Photographer: Kiyoshi Ota/Bloomberg , Bloomberg

(Bloomberg) -- A former EBay global security manager who admitted joining a bizarre cyberstalking campaign against an online critic blames alcoholism and a culture of heavy drinking at the company for his poor judgment and an incriminating “thumbs up” emoji he texted to a co-conspirator.

Philip Cooke, who joined EBay after his retirement from the Santa Clara Police, is one of seven ex-EBay employees accused of harassing a suburban Boston blogger and her husband in 2019. The campaign included anonymous threatening tweets and macabre deliveries, including a bloody pig mask and a book on surviving the death of a spouse.

Cooke is the first to face sentencing out of the five former employees who plead guilty.

His lawyer said in a court filing that the culture at EBay in 2019 encouraged heaving drinking. Booze was available at a campus bar that opened at 3 p.m. and alcohol was kept in work spaces. “It was typical to take morning shots of alcohol with co-workers,” the lawyer said. EBay didn’t immediately respond to a request for comment.

“As a result of being drunk, Mr. Cooke did not fully comprehend the extent of the misconduct toward the victims and his judgment was impaired,” according to the attorney. He is now sober, they said.

Cooke, 56, was on business in India when his co-workers flew to Boston to conduct surveillance of the victims’ home. He had advised them against that part of the scheme, his lawyer said.

But Cooke admitted he misled Natick Police about the campaign and he pleaded guilty to obstruction. He is seeking home confinement “for whatever period the court believes is necessary.” The government has agreed to recommend 37-46 months in prison under Cooke’s plea agreement.

Cooke’s sentencing is scheduled for July 27.